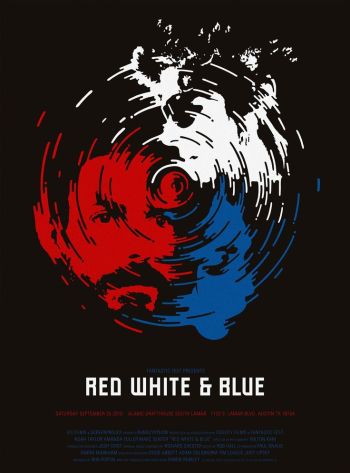 Today’s entry is the criminally underappreciated (hence, the category) Red White & Blue [sic]. This is another one that I found on a some list of little known genre films that deserve some attention. And another one that I would hesitate to call straight-up horror. (but who cares, right?) It’s certainly a bleak (SO BLEAK), violent drama. It will definitely appeal to horror fans. Especially those who are willing to patiently let a story to run its course without the need for explosions and shit to snap audiences to attention every few minutes. (i’m not shitting on those films. i mean, i love Dredd so much, y’all) Red White & Blue truly does deserve some attention. So, let’s get into it, shall we?

Erika spends nearly every night at bars and clubs picking up guys to fuck. Sometimes just one guy. Sometimes a few. She is detatched emotionally and, due to her insistence that the guys eschew condoms, reckless sexually. (she even uses homophobic epithets to pressure dudes who suggest safe sex) She meets and forms a non-sexual friendly bond with Nate (played by Noah Taylor, who, if you’re like me, you think of as Wolodarsky). He’s currently working a menial job, but he claims to have been a pretty big dog in the army. (or whatever. it’s the army. i just mentally add ‘or whatever’ every time i read/hear the word ‘army’. thanks, Public Enemy) His particular skill is interrogation. He excels because he isn’t bothered by the suffering of others (including animals). These two emotionally crippled misfits compliment each other nicely. Their little bit of human relations normalcy is threatened though when Franki [also sic], one of Erika’s one night stands, turns up with a beef (and it’s a doozy of a beef). (it was hard to write this synopsis without giving anything major away. also, the story is told out of sequence, so it’s doubly hard. basically, i’m saying that i’m a hero. you’re welcome)

You may remember Simon Rumley from his segment in The ABCs of Death, “P is for Pressure”. Like that story, Red White & Blue isn’t traditional horror. It’s a bleak story with horrific elements. Unlike that story, Red White & Blue doesn’t have a happy ending. (is that a spoiler? i don’t think it is. trust, me i’ve seen it.) There are certainly happy(ish) moments. But, make no mistake, this is a bleak fucking story. B-L-E-A-K. Which is hard to do without falling into straight-up cynicism. Somehow though, Rumley manages it. And that’s quite a feat considering that “on paper” this story could easily have been monumentally cynical. The characters certainly are. It is a testament to the complexity and intelligence of Rumley’s writing that even these cynical individuals can draw the viewer in and foster some sympathies. Rumley’s mastery is evident in the fluidity of those sympathies. We see the softer sides of these characters but we aren’t shielded from their (unconscionable) sins. Viewers will be repulsed by the characters they root for (Noah Taylor plays this out perfectly). Repulsed by their actions (some of which are graphically violent) but sympathetic to their motives. It’s a thing of beauty (the paradox, i mean. though the violence is ‘beautiful’ in a ‘holy shit!’ sort of way) This film manages to be a quiet, deliberate story of extreme actions. The seamless combination all of these opposites makes this a unique and rewarding (i sound like a dick, i know. but that’s how i feel about it) experience for any film fan.

The Final Cut: Red White & Blue is a bleak, horrific drama peppered with extreme violence that forces viewers through a gauntlet of emotional paradoxes. Viewers will come out of it breathless and in awe of the potency of this tragedy (and  probably feeling bit depressed).