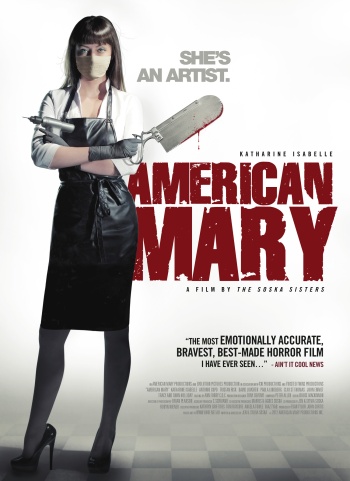 I’ve been putting off writing about American Mary since I started NoRealDanger. It’s not that I’m conflicted about it. I’m not. (see below) I just want to get the words/impressions/feelings right. The film deserves careful consideration. Especially from me, a man. The directors, Jen and Sylvia Soska, have described the story as “radical feminism”. If you’ve read enough of my reviews, you’ll have probably suspected that I’m a PC, lib, feminist, commie, whatever. I don’t mind the intended epithets (or this-guy-knows-what’s-up nods). Whatever I am, I’m apparently a man who loves to see a woman tap into her heretofore little-recognized power to become an underground body mod icon, because I loved American Mary. Let’s get into it.

Mary (THE Mary. from the title) is a medical student struggling to make ends meet. Her coursework demands all of her time so she can’t work to get money to do the little things in life like paying bills or eating. She reaches a breaking point and goes to a rather demeaning “interview” at a strip club. When the club owner’s goons accidentally fuck a guy up too much, Mary is wrong-place-wrong-timed into helping out. They figure a med student can do it. And she can. As a bonus, she’s given a pile of cash to save the guy’s life, which she does. This bit of medical prowess prompts one of the women at the club – a performer who has modified her body to look as much like Betty Boop as possible – to approach her with a surgical proposition – remove her friend’s nipples and genitalia (i’m on a hyphen roll here!). Mary refuses at first but agrees when the offer becomes too good to pass up ($$$$). She quickly becomes the go-to unlicensed surgeon for not-quite-legal body modifications. As money comes rolling in, Mary is feeling pretty good. Good enough to let loose a bit. Just as everything is coming up Mary, everything comes up super shitty (like, devastatingly so) instead. Does Mary let that destroy her? Not exactly.

This film is The Soska Sisters’ (feature) follow up to Dead Hooker in a Trunk. The earlier film is a raucous, violent farce that leans toward the sophomoric. With American Mary, The Soskas have left their sophomoric predilections behind for a beautifully shot, intelligent, horrifying, story-driven masterpiece. That’s not hyperbole. Within independent filmmaking, this is one of the best (the qualification excuses some VERY minor flaws. a few moments of uneven acting, for example). Being an independent masterpiece doesn’t mean that it’s a completely somber affair though. There are moments of levity in American Mary. But those well-timed moments are few and serve to break up the bleak (in a good way) storyline. And this is pretty bleak stuff. I will refrain from giving away too much, but suffice to say, this is a dark film. Mary (expertly played by Katherine Isabelle) is smart, hard-working, and goal-driven. So, it’s especially harrowing to see her beset by evil and falter because of it. The control that she then asserts over her life – her new career goal, her financial independence – is that much more satisfying because of this. And when she takes that control and uses it to remove a cancer on society (and women in particular) by removing said cancer’s control – over his freedom, his body, etc. – we applaud it. Is it realistic? It doesn’t need to be. This is a movie. Audiences have wanted to see the bad guy(s) punished since the beginning of narrative film. We’re not looking for realism (well, not always), we’re looking for escape. And the Soskas deliver this in spades. The guy who deserves punishment gets it. In a big way too. It makes for a conflicting experience for the PC, lib, feminist, commie, whatevers. We know that punishment like this doesn’t help victims, but we love to see it nonetheless. It elicits a selfish pleasure that we revel in in the moment but feel a tinge of guilt for afterwards. But only a tinge. (because fuck that piece of shit) The film is perfectly balanced (twin directors with complimentary personalities) in this regard. We sympathize with Mary. We want her revenge. But we also see that it is a dark path that can lead to no good.

The Final Cut: American Mary is a devastating and horrifying story of female empowerment gone dark. It’s a prime example of great independent horror filmmaking that deserves a place among modern cult classics.