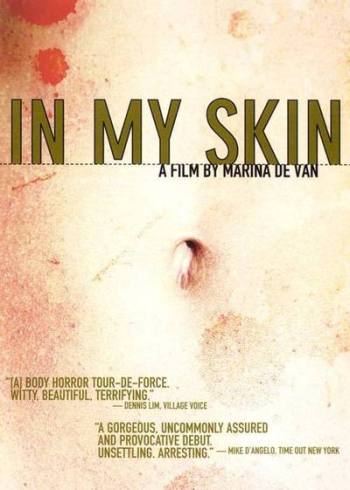 Sticking with a body horror theme for this week, I got to thinking about some of the great (read: most disturbing) body horror films that may have slipped under the average (American) horror fan’s radar. Possibly because they didn’t get a wide release, didn’t get much buzz, featured subtitles (i know, i know, reading is hard), or whatever. The first film that came to mind was In My Skin, (aka: Dans Ma Peau) directed by by Marina de Van. It’s a film that may have slipped through the cracks because it wasn’t readily available in the U.S. upon it’s release. And it just pre-dated the surge of interest in French horror caused by Haute Tension (as far as i know. please don’t “well actually” me). It’s also one of those films that could spark some horror/not horror arguments. Either way, it’s a damned unsettling movie. Let’s get into it, shall we?

Esther (de Van expertly pulling double duty as director and star) is a successful yuppy with everything apparently going her way. One night at a chic party, she ventures outside for a little alone time and stumbles into some construction supplies, injuring her leg. She doesn’t notice at first that she’s done some real damage until a bit later when she takes a look but still doesn’t treat it like it’s a big deal. When she does get around to seeing a doctor about it, he’s surprised it didn’t hurt/bother her. This intrigues Esther too. Alone, she begins poking and prodding the injury with morbid fascination. Her poking and prodding leads to picking and pulling; to stabbing and gouging; and to adding some more cuts to herself; and to worse. While her self-inflicted injuries pile up, her friends become increasingly concerned and Esther becomes increasingly detached (like, say, a dismembered body part) from them.

de Van’s In My Skin is a devastatingly intimate film. It is the epitome of arthouse horror (and it IS horror). It’s beautifully shot with masterful use of close-ups and one-shots. The viewer is drawn into Esther’s psyche (and subsequent psychopathology) like a oil-slick predator luring its prey to within striking distance.  We are pulled in, wrapped up in a false security blanket and then shown horrors that are all too real. This is the stuff of our less psychedelic nightmares. You know the ones – where you can’t seem to find your way home and the hours tick away; where your teeth crumble into rotten shards; where you careen out-of-control while trying to steer a car from the back seat. These dream realizations of our anxieties are just plausible enough. Maybe our teeth WILL crumble. Maybe we WILL start compulsively gouging chunks of our skin away with a sharp hunk of metal. de Van’s portrayal of Esther’s descent into madness is Oscar-worthy (le Oscaire Francais?). She’s a flawless character who develops a doozy of a flaw that consumes and destroys her. It’s like watching a dog try to cross a busy highway from a prison cell. We can’t turn away. We have to keep rooting for the little guy while simultaneously warning him to turn back. But we know – in our hearts – that we are witnessing imminent, heartbreaking tragedy. This is the film’s greatest accomplishment. The emotional investment it elicits keeps the viewer riveted until the very end. We silently (or loudly if you’re watching alone) pull for Esther to emerge from her ordeal relatively unscathed while desperately wishing she would turn back before it goes too far.

The Final Cut: In My Skin is a pitch-perfect arthouse horror film. de Van shows great skill as both an actor and as director. This intimate and devastating film deserves a place among the body horror greats. (well worth the intellectual investment required to read subtitles)