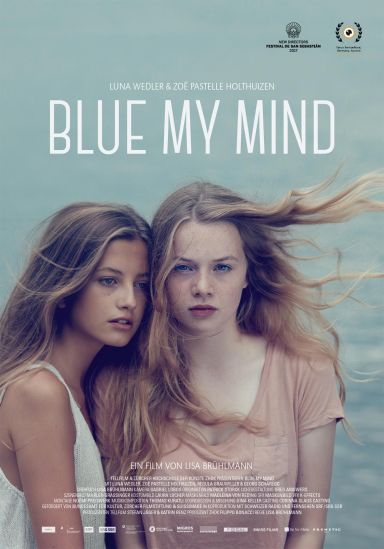 I’m continuing my coverage of Fantasia Int’l Film Festival 2018 with the Swiss coming of age film, Blue My Mind. Enough chit – chat. Let’s get into it!

Mia is 15. She’s starting at a new school and she’s eager to get in with the cool kids. After a rocky start, they accept her into their swearing / smoking / drinking / squirting ketchup into their mouths clique. They all talk about having sex, but it’s unclear whether they’re telling the truth or not. Mia herself is a virgin. And she hasn’t had her period yet. Sure, she’s a bit old but when she finally does have it, we start to understand that she’s different from typical girls. (besides, Carrie White had the same delay and she turned out fine, right?) Her first period coincides with some rather startling and abnormal changes. She develops yen for raw fish. Her legs become discolored. She recklessly seeks sexual experiences that she doesn’t really even want. And her toes fuse together. On top of all that, the teen has a stereotypically antagonistic relationship with her parents. In fact, she feels so misunderstood by them that she suspects she may be adopted. Turns out the truth is way, way weirder.

Blue My Mind is a terrible title. Let’s just get that right out of the way. It makes only tenuous sense even after having watched it. But a title is just a title. The Silence of the Lambs is an objectively dumb title, right? But the movie is fucking great. (i guess the difference is that the title makes sense after you see it) In this case though, the title is a great analogue for the film. (i’ll come back to this. stick with me) Director, Lisa Bruhlmann’s coming of age story is nothing new. (that Carrie reference above is not unintentional) The majority of this film is about a girl trying to fit in and find her way during the most hormonally tumultuous time of her life. She is railing against the expectations put on her by school, her parents, and the concerned (and judgmental) good kid at school. She is confused and excited about her transition into womanhood. She’s seeking acceptance from her peers. All things that we’ve seen before in other movies. (though, not nearly as many movies as boy puberty movies) But there’s a twist! Mia isn’t going through puberty like anyone she knows. She can’t even find a case similar to hers online. Therein lies the mystery. But I hesitate to say that it’s the mystery at the “heart” of Blue My Mind because it’s really not. The heart of the movie is Mia’s puberty/transition – a story that’s all too familiar. If you’ve read my reviews, you may recall that this is the exact problem I had with Raw. Both are good, well-told teen girl dramas with some beautiful photography and intimate characterizations, but neither held my interest as a horror fan. (context: i’m also a man in his early 40s who eschews dramas for the most part) To be fair, Bruhlmann probably did not make this film with traditional horror as her goal. She has emphasized the horror of puberty for a girl in this film through a smattering of the main tenets of body horror. It ends up being a bit more “oh, this is where this is going” than “OH! THIS is where this is going!” It falls short of clever. Just like the title. (told you i’d get back to it!)

The Final Cut: Blue My Mind is a fine coming of age teen girl drama with a mildly mysterious supernatural twist. The supernatural elements aren’t given enough focus to qualify this as horror and the familiar drama treads very little new ground.