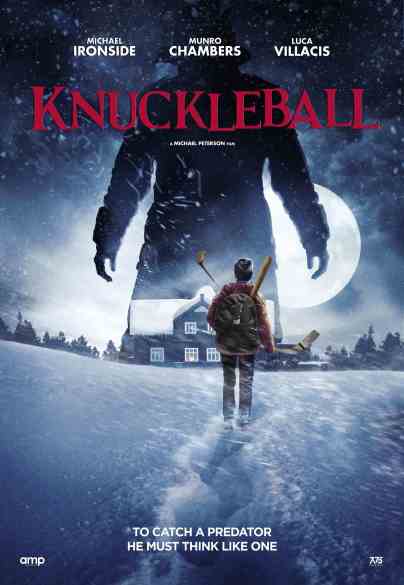 More Fantasia Int’l Film Festival 2018 coverage! I know! It’s so much! I’m so generous! Check this shit out! (my review of Knuckleball)

Henry’s mom and dad aren’t the model couple. It doesn’t seem like they like each other at all. Maybe that’s why dad is using this trip back to mom’s hometown (for a cousin’s funeral) to get some alone time with her. Maybe they can salvage their marriage. Henry can just stay with grandpa Jacob on the family farm for a couple of days. Grandpa is a hardass man’s man who expects a 12 – year – old to work to earn his keep. Henry is very compliant and grandpa eases off a bit every once in a while. Like, when he helps him learn to pitch a baseball pretty well. Seems the old man has a soft side after all. Henry recognizes this and ends up pretty happy to be there. Until things go south completely and Henry ends up alone on the farm. His cell phone is dead and grandpa doesn’t have a landline, so the kid seeks help from the young neighbor guy. But is he to be trusted? (no)

Knuckleball works some minor miracles with it’s minuscule cast. First off, Michael Ironside’s grumpy old man is pitch perfect. He’s dour and growls his lines but you can see the fondness he has for his grandson. His eyes soften when he looks at the kid. When he’s out of the picture, Henry’s isolation and desperation are all the more terrifying because we know grandpa would never let anything bad happen to him. Now that a bad thing has happened (no spoilers), Henry goes through a rapid succession of logical responses when he finds that he is on his own. Those responses are believable and increase anxieties in rapid succession. He’s running to the neighbor so soon that the audience barely has time to remember that there’s something off about that guy. Something very off. The man, played to the hilt by Munro Chambers, oozes a skeevy creeper vibe with his brown teeth, patchy stubble, and lascivious eyes. His conspicuous lies meant to ensnare Henry and his attempt to establish dominance over him (“Hank”) make the skin crawl. So when the film shifts from our expectations of a tense cat – and – mouse to a cheerless Home Alone it’s a bit of a letdown. But only a bit. The action is exciting. The menace is unyielding. And the clock is ticking for Henry. The story even twists a couple more times during the chaos. It’s enough to make us relax and suspend our disbelief in Henry’s extraordinary abilities as a siege survivalist.

The Final Cut: Knuckleball features some great performances from a tiny cast. It wrings every last bit of fear and menace out of its minimal settings.