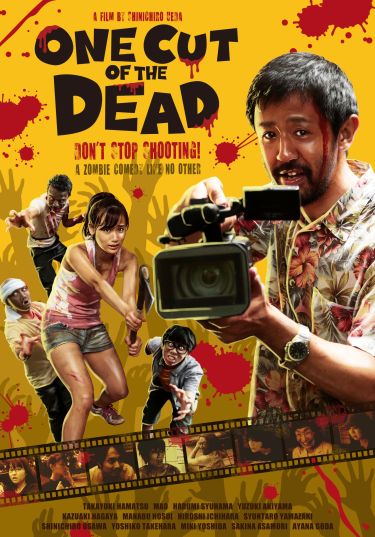 Fantasia Int’l Film Festival is wrapping up but my reviews aren’t! Here’s one for the Japanese film, One Cut of the Dead. (Kamera o tomeru na) Read it why don’tcha?

A single cut, 30(ish) minute film about a crew shooting a zombie film that is beset by real zombies is the jumping off point for a behind the scenes story of how the seemingly impossible task comes to fruition. (that’s it. that’s the synopsis)

Let me just say right off the bat that One Cut of the Dead isn’t necessarily a horror film. Sure, it starts with the titular single shot short zombie film. And that is pretty clever. It features bloodspray, decapitations, dismemberment, and zombie biting and chasing and puking. It’s quite the achievement. And it’s pretty fun to boot. The next half hour focuses on a fictionalized version of everything that led up to the film being made. And the final half hour concerns the actual making of the film from the first half hour. (sheesh, i think i need to draw a diagram to keep this straight.) If you think that all sounds convoluted and boring, then you’re wrong. It works. The film ends up being funny and endearing and plucky. All of that and refreshingly unique as well. The subplots of the father – daughter relationship; the director – primo uomo balance (that’s a male prima donna. i looked it up); the alcoholic – important acting job stress; the “soft water” – IBS connection; and the crew – actor – overboard method acting troubles, all play out efficiently and satisfactorily. The characters have just enough depth to sell the absurdity of their situations and to keep the audience invested. That’s quite a feat itself considering the size of the ensemble cast.

The Final Cut: One Cut of the Dead is a fun and unique meta film about the making of a fun and unique horror short. Its compact characterizations and clever spin make for an enjoyable experience (even though it’s not quite a horror film).