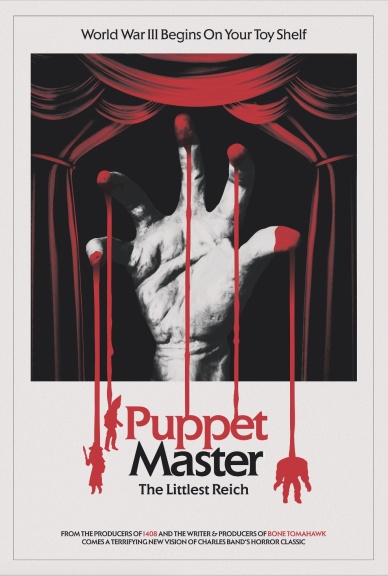 My Fantasia Int’l Film Fest 2018 reviews just keep on coming! Next up is the long-awaited 12th Puppet Master film (just kidding, it’s only been a year since last one), Puppet Master: The Littlest Reich. This film has gotten quite a bit of buzz. Probably because it stars some decent comedic actors – Tom Lennon, Charlyne Yi, and Nelson Franklin; some genre regulars – Barbara Crampton and Udo Kier; and it was written by S. Craig Zahler (writer/director of Bone Tomahawk and Brawl in Cell Block 99). You’re probably wishing some blog would tell you if it lived up to that buzz. Well, you’re in the right place! Let’s get into it, shall we?

Edgar has to move back into his parents house when his marriage falls apart. He’s a mid-40s comic book shop clerk and his dad is quick to remind him of his failures. He finds a puppet from the infamous Andre Toulon in his murdered brother’s old room and decides that he can sell it at an upcoming auction for 2,000-3,000 bucks. Just enough to help him get back on his feet. Toulon gained his infamy when he was found to have murdered and tortured women in his house and was shot to death by police. Oh, and he was a Nazi. (according to IMDB trivia, this story takes place in an alternate universe where Toulon is an evil Nazi) What nobody knows is that his puppets were also murderous! Edgar and people from all over the world converge on the small town where he made his last stand to sell their original Toulon puppets at the auction. Things go pretty far south for the sellers as puppets go missing and blood gets spilled. Weird how it’s only the Gypsies, Lesbians, and Jews that are being mutilated though. It’s up to Edgar and a plucky band of hotel patrons to figure things out and stop the puppety massacre.

Let me start my critique with a suggestion. If you are a fan of the Puppet Master franchise, then go ahead and click on one of my other reviews. (have Netflix? read this) You’re going to know a lot more than me and you’ll probably get annoyed that I didn’t “get it”. Everyone else, stick around. I’m writing this review as a horror fan who only saw the original Puppet Master and probably Puppet Master 2 when I was a kid. I don’t know why this one is set in an alternate universe. I don’t know how Tom Lennon’s character’s brother died. I don’t know why the original puppets aren’t all accounted for. That means I’m missing a lot of context that fans will get and that might have been necessary to fully enjoy this movie. I’m not saying that I hated it though. There are some great gory kills and some good laughs to be had. Sometimes at the same time. The gags, jokes, and lines that are in – on – the – joke cheesy even work well for the most part. At least I’m assuming the cheese is intentional. The impression is that this is a winky throwback rather than a trite retread. But I could be wrong. It certainly plays pretty solidly like an 80s low budget direct – to – video schlocker. The line is so blurry that the “joke” may just fly over the heads of casual viewers. (or seasoned viewers like me) Bottom line is that it’s fun and violent. Who cares about poorly delivered lines, campy plot points, gratuitous nudity, opaque mythology, and an unfinished (“to be continued”) story when you’ve got fun and violence?

The Final Cut: Puppet Master: The Littlest Reich is a niche film through – and – through. It’s core audience already knows what they’re getting into and outsiders will probably find it mildly entertaining at best.