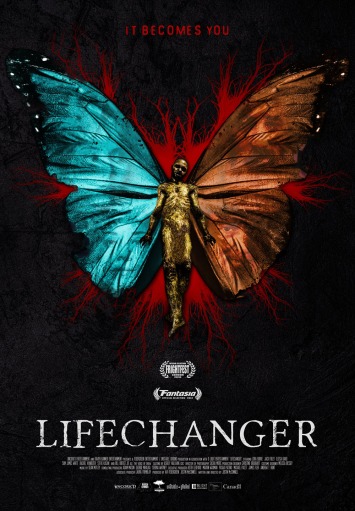 Next up – Lifechanger. Another review in a long(ish) line of reviews of films showing at the Fantasia Int’l Film Festival. Enjoy!

From the start it is clear that our protagonist isn’t the most moral of people. In fact, he may not be a “people” at all. See, he (we know it’s a he because we hear his inner dialogue in his own voice) is a shapeshifter (skinwalker?) who takes over the lives and looks and memories of people in a gruesome and final way. He goes through a lot of human lives too since he can only inhabit a new life for a short time before he starts to literally rot. He uses every new persona he takes on to get close to a single woman who hangs out at the same bar every night. He’s drawn to the woman and believes that she is the only one that he can ever truly love. As his murders become necessarily more and more frequent, his desperation grows. Seems like he’s running out of time to make a real connection with the woman. He’ll have to do something drastic if he hopes to win her over.

Lifechanger is a decent supernatural creeper. It has gruesome and intense transitions between skins. (is that right?) And a lot of the effects are practical, which is cool. Skin bulges and bubbles and characters choke and gasp in pain. It’s a lot of fun. The film also has some good performances. Each actor portraying the shapeshifter makes it their own and Lora Burke (star of Poor Agnes) shines as the (unrequited) love interest drowning her presumed writer’s block in gin and tonic. She’s tough and savvy and a bit world weary and, above all, sad. The story is intriguing enough too. The idea of a loved one being someone other than who we think they are is terrifying. Especially when that someone is a killer. A paranormal killer at that! If you’re getting the sense that despite all of these positive aspects Lifechanger falls short of greatness, you’re right. Despite all of the good points, the film has some unfortunate faults. For one, the voice over dialogue often fills exposition gaps that don’t really need to be filled. First person voice over is used so much that it is inextricably tied to hackneyed and cliched film writing. There’s a stereotype to overcome that sets the bar extremely high for a filmmaker. Lifechanger doesn’t quite land completely on cliche, but it doesn’t do enough to distance itself from it either. And that leaves a bad taste in the viewer’s mouth. But perhaps its biggest sins are in the contrivances and muddled logic of its own central character’s actions and mythology. It’s established from the outset that the thing can only inhabit a skin for an extremely short period (i thought it said 6 hours but maybe it was 6 days). The final act occurs in one skin and the timeline seems like weeks. The thing also seems to try to cover its crimes up sometimes but unabashedly draws attention to itself other times. It covers its tracks in the least convenient way possible for a being that is racing against time at all times. These lapses in internal logic may seem trivial (or like i’m being an uptight nerd), but there are just too many of them to ignore. It took me out of the story too much to fully enjoy what could have been a fun and grotesque 84 minutes. (sub-90! that’s another point in its favor!)

The Final Cut: Lifechanger has a lot going for it – a solid performance from Lora Burke, some gruesome practical effects, an eerie story, and a pithy runtime – but it’s contrived / muddled logic and blurred mythology drag it into mediocrity.