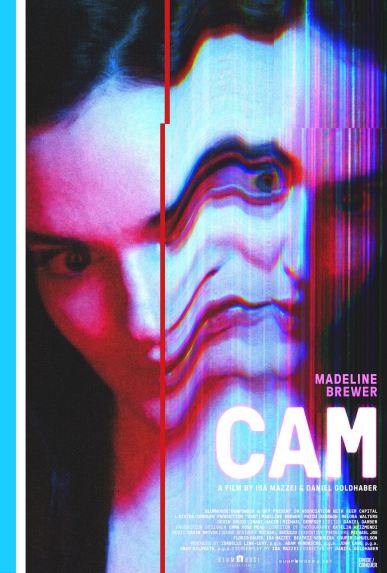 What’s this?! An American film in my Fantasia Int’l Film Festival 2018 reviews suite?! Well, I can hardly believe it myself. But it’s true. Cam is an American film and I’m about to review it riiiiiiiiiiggggggghhhhhhtttt-NOW!

Alice is a “cam girl”. She performs under the name Lola and one of her greatest desires is to break the top 50 on the list of most popular cam acts hosted by her cam site. (i’m going to go ahead and suppose you know what the hell i’m talking about here. if you don’t, then look it up but make sure you know how to clear your browser history first) Lola’s gimmick is that she does a different theme every day. There’s pool party day. There’s suicide by throat slitting day. There’s aerobics day. And so forth. One morning, after a particularly desperate attempt to climb the ratings ladder, she wakes to find herself locked out of her cam account. That in itself wouldn’t be a big deal because she can always just reset her password. Problem is – someone who looks exactly like her is live on her cam channel performing a sexy theme day theme right now. No amount of tech support will help her out of this jam. Her dissociation is threatening her sanity. Especially since her doppelganger is on a meteoric rise to the top of the charts.

Cam is a film directed by a man about a woman in sex work. Or at least the sex industry. (i think it counts as sex work even if she doesn’t have sex for money. the WHO is vague about it) I only mention it because that might be a point of contention for some. Or perhaps even a reason to skip this film on principle. I would totally understand if that were the case. Maybe it helps that it was written by Isa Mazzei (a woman). Maybe it also helps that it’s pretty damn good. Madeline Brewer puts in a great performance as Alice / Lola. Her aspirations are her own as much as her cam show is. She has commodified the male gaze, staying true to her own set of moral rules. And she’s doing well for herself. Her struggles may seem trivial to those who live their lives free of social media (and the “gig economy”), but they are the world to her and the film sells it perfectly. Alice’s life online and offline is depicted with depth and without judgment. She has worries and responsibilities that are relatable to any young person working to support him/her/xyr – self no matter the line of work. And when her surreal doppelganger nightmare begins it is supremely unsettling. Is it AI? Is it supernatural? Is it CG? The audience is left in the dark enough to keep things intriguing. And Alice’s scramble to figure things out keeps us engaged and wondering what will come next. It’s a deftly crafted story with a decidedly current foundation.

The Final Cut: Cam is a modern doppelganger thriller with a great performance by its lead. Its horrific twist on identity theft is a surreal nightmare that will have viewers biting their nails all the way through the nerve-racking climax.