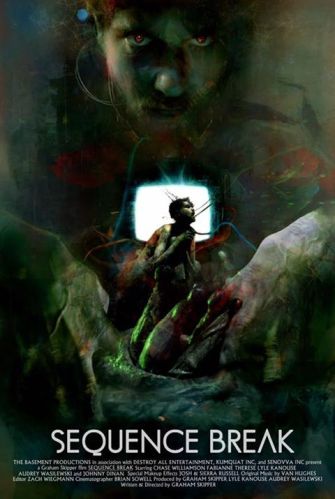 I’m really cranking these Fantasia Int’l Film Fest reviews out! (by “cranking”, i mean that i’m way behind and scrambling to get movies watched and reviews written while also having a job and a family. what i’m saying is this: you’re welcome) Next up, Sequence Break!

Oz (Os?) repairs classic arcade games for a living, but the classic arcade game sales and repair shop where he works is closing and he’s about to be out of a job. (because people these days don’t appreciate good things dammit!) As he runs out the clock on the place, he meets Tess, a videogame fan, and they strike up a relationship. One night a strange, disheveled dude leaves an envelope at the shop that contains a game motherboard (is that right?). Oz hooks it up to a cabinet, plays the game, and things start getting really weird for him. Like, 80s Cronenberg weird.

Sequence Break is an homage to the 80s. It centers on old school arcade games. It features a synth score. Close-ups of faces are lit in greens and reds like Evilspeak. And it pays direct tribute to Videodrome in tone and in viscera (and at least one cribbed practical effect). Therein lies the rub though. Cronenberg’s seminal body horror masterpiece was a masterpiece because it was new and insanely different and had something to say about entertainment and consumer culture. Sequence Break, an homage, is not new (by definition). And it has very little of that substance that elevated Videodrome. It is a slimy tribute to Cronenbergian aesthetics. It does an impressive job of it too. But the story never really delivers a message. That’s not a dealbreaker though. The film is interesting and gross and doesn’t overstay its welcome (sub-90 minutes!). Fabianne Therese nails the bold-but-awkward, Tess. She reunites here with her John Dies at the End co-star, Chase Williamson, who seems to be carving a nice niche for himself with smart slacker characters. Sure, there are some uneven performances from tertiary characters, and the editing is a little too hyper at points (also, there’s shaky face), but overall, it’s a solid little indie freakout.

The Final Cut: Genre fans will find a lot to like in Sequence Break. There’s goopy, visceral practical effects and (mostly) solid performances, but its lack of real depth may put some folks off.