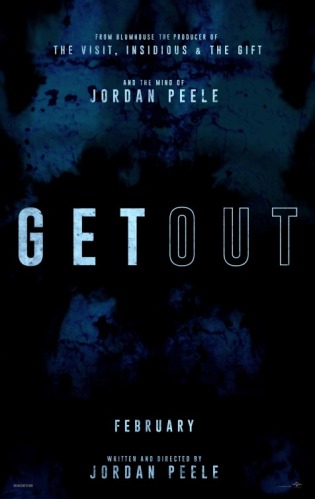 When Jordan Peele of “Key and Peele” fame announced he was taking on a directing project and that project was the horror feature, Get Out, my interest was piqued. The guy is funny and seems like a more than capable creative type. And by his account, he’s a horror fan.  Besides, he has access to funding and top-tier support that most independent directors don’t. So, there were good odds that he’d make a decent movie. When he tweeted that he was proud of the “thriller” that he’d made, I lost a little of my enthusiasm. Was he referring to it as a thriller just to reach those viewers who claim to hate horror (but love movies like Se7En and Silence of the Lambs)? Or is he one of those people? Then when I started seeing reports that the film has a strong and overt social message, the needle on the ol’ interest meter went back up. In short, it was was a wild emotional rollercoaster ride (mixed metaphor, I know) leading up to my viewing of the film. So, how did it turn out? Let’s get into it, shall we?

Chris is headed to his girlfriend, Rose’s, parents house to meet them for the first time and stay the weekend. He’s a bit more nervous than is typical for a first parent meet because he’s African-American and Rose is white. He’s the first black man she’s dated and she doesn’t think it’s necessary to “warn” them ahead of time. Her insistence that her dad “would have voted for Obama a third time” isn’t super reassuring, but Chris loves the woman and what the hell can he do at this point? When they arrive, Chris meets mom and dad, who are awkward, but not unbearably so. He also meets their African-American servants, who smile vacantly and seem slightly off somehow. Like, they’re in a daze. The young couple learns that it’s the weekend of of the family’s big annual party. Rose plum forgot all about it! When guests start arriving and Chris is surrounded by dozens of white folks asking very inappropriate race-related questions and a couple of black folks acting like automatons, Chris gets uncomfortable. When one of the guests has a bizarre breakdown and seemingly attacks him, he wants out of there pronto. Is the anxiety baseless or is he in real danger? (he’s in real danger)

I’m leaving that synopsis a little vague by design. I highly recommend seeing the film knowing no more than that it’s horror and that it features “polite” racism. (i won’t spoil anything here) Peele’s talent is evident in the masterful way he portrays seemingly simple things as dreadful – things that I’m told/I’ve read African-American’s experience everyday. As a white cis male, I’ve had it inequitably good all of my life. As a person who likes to think of himself as progressive and empathetic, I’ve known for a long time that “polite” racism is detestable and wrong no matter how good the intentions are behind it. It wasn’t until Get Out that I got a vicarious taste of the aggression and superiority in every ignorant comment. To meet someone for the first time and to tell that person that you like Tiger Woods apropos of nothing other than the golfer being within a few shades of that person’s skin tone is often chalked up to ignorance in the real world. But it speaks to a lack of decorum. A lack of social awareness. And a smug superiority in one’s own skin tone. In that single tiny sentence, the speaker has signaled that they are talking down to the listener. Or worse, that they believe they are speaking to another species of animal. That is crushing, I’m sure. Peele puts broad white faces in close-ups and two-shots grinning and ogling over Chris – played perfectly by Daniel Kaluuya – as if they’re expecting him to dance for them at any moment. When he’s surrounded by these people, the viewer experiences his anxiety. His isolation. And we get a glimpse of what that’s like even if we’ve never experienced it ourselves. We see that even though he’s surrounded by smiling, well-meaning “gentile” folks, he’s being socially assaulted at every turn. As humans (social animals), that is almost unbearable to us. I can’t imagine how harrowing it is for POCs who no doubt experience similar situations. Once Chris’s anxieties crescendo, the story ramps up into a violent thrill-a-minute finale that delivers the horror goods.

The Final Cut: Get Out steadily increases anxiety levels as it moves from “woke” blindness, to awkward racial tension, to “polite racism”, and beyond. By the finale, viewers will be desperate to escape the horrors wrought by racism and the human monsters who profit from it.