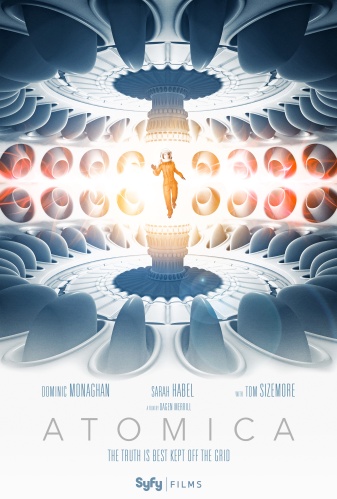 I suppose it’s a bit of a confession to admit that I’ve never seen a SyFy original movie. (i swear it’s not just because of their stupid, stupid spelling of sci-fi) I’ve never seen Sharknado or any other portmanteau that involves the word “shark”. I’ve only ever heard the films spoken of in ironic or derisive tones. Since I’m not a big fan of so-bad-it’s-good films and even less of a fan of so-bad-it’s-bad films, I’ve pretty much ignored them. So, when I got a media e-mail promoting the SyFy film, Atomica, I took a moment to scoff at its dumb name and trashed it. When I got a second e-mail a couple of days ago asking me (personally. by name.) to consider it for review, I figured, ‘What the hell?’ I mean, if SyFy and their contracted PR firm are that desperate for coverage that they’d send out a second call for reviews to a tiny site like mine after I ignored their first e-mail, then who am I to deny them their coverage? I promised a review knowing full well that they might not like what I produced. As much as I try not to sling shit on this site, sometimes one must (ya jus gotta). So, how bad was Atomica? Actually, it wasn’t that bad. (end of review.) (nah! i’m just joshing)

Abby is a junior nuclear engineer who volunteers to travel to a remote nuclear power facility in the middle of a radioactive desert. (the story is set in the future, by the way) The facility is nearly fully automated and needs only a maintenance tech and a nuclear scientist to run smoothly. When she arrives, the place is in disrepair and it seems deserted. She soon runs into the maintenance man, Robinson (played by Dominic “You All Everybody” Monaghan), wielding a golf club and nervously asking who she is and where she came from. Once she convinces him that she is authorized to be there, she finds out that the station’s nuclear scientist, Dr Zek (played by Michael “Mr Blonde” Madsen), is somewhere out in the barren wasteland “collecting samples”. Robinson shows the woman around, makes her a macchiato, tells her his theories on “sensory deprivation psychosis”, and suggests that the station itself is a bad place that gets in your head. His proof? Well, he says that Dr Zek turned violently paranoid before he left the station. When Abby finds Zek unconscious outside and drags him in, he tells a different story when he wakes up. One that shifts suspicions onto Robinson. Who is she to believe? What are the men hiding? Is the station really evil?

First off, this film exceeded my expeditions in almost every way. I expected shitty CGI. I got some shitty and some good CGI. I expected wooden, overwrought performance. I got mostly okay performances. I expected laughable “future” tech. I got a creme brule torch for an arc welder and some pretty cool looking 3D computer and phone interfaces. (i expected Steve Sanders. i got a hobbit) All this is to say that the film surprised me in many ways. The story was simple but engaging. The acting was mostly decent and when it wasn’t , the editor cut around it pretty seamlessly. The set design and art direction evoke sci-fi thrillers of yesterday. The narrow, dark passageways, the pipes, tubes, and conduit lining the walls and ceiling, and the sparse / economical cast, bring Alien, Saturn 3, and Darkstar to mind, among others. The isolation and paranoia are reminiscent of Solaris, Event Horizon, and The Thing. Sure, director, Dagen Merrill, is wearing his influences on his sleeve, but that’s ok. There’s enough of a blend of schlock and creativity, that we can look past the more derivative aspects of the film. And when we do, we get a tight, intriguing sci-fi chiller that keeps the viewer guessing until the very end. (and at 81 minutes, it doesn’t overstay its welcome!)

The Final Cut: Atomica has its flaws, but it is a decent sci-fi film overall. Fans of isolation and paranoia (and of future tech) will not be disappointed (as long as they set their expectations on the low side).