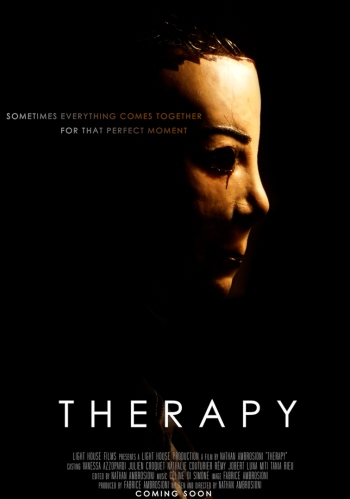 French. Found footage. Fantasia (International Film Fest 2016). That’s what I knew about Therapy going into it. Modern French horror can be pretty damn good. (see: Frontier(s), A L’interieur, Martyrs, Ils, Dans ma Peau, etc.) Granted, I either haven’t been attuned to the good stuff coming out of France in the last few years, or there hasn’t been any good stuff coming out of France in the last few years. Either way, I still get a rush of anticipation when I settle in to watch a new (or new-to-me) French horror film. There are so many good ones, that, odds are, it will also be a good one. The only French film on my Fantasia roster is Therapy (aka: probably whatever the French word for therapy is). My only hesitation was that it relies heavily on the found footage conceit. That’s minor. I mean, there are good found footage films. And this one is French! (did i mention that?)

Detective Jane and her partner are tasked with combing through the mysterious footage found (get it?) at an old abandoned spooky building. It’s on GoPro, camcorder, and even Super8 film. Whoa! That’s a mixed bag. Better send it to the lab so that Anthony and the boys in editing can digitize it all and edit it together into a linear, chronologically-ordered narrative that they will then deliver in segments of 10 to 15 minutes. No problem. That’s how police labs work in France! Each segment furthers the story of a group of 5 friends who went camping and ran afoul of a masked, axe-wielding maniac at the old abandoned spooky building. A building so large, that the police might take days looking through it trying to find the campers. What is this huge place?! Oh no! It was an insane asylum before it was shut down and everyone apparently forgot about it! An insane asylum? Even spookier! Will the footage reveal that the kids were all just playing pranks on each other and made it safely back to their tents? Or will the footage reveal that they are being killed off one-by-one by a masked, axe-wielding maniac? (oh wait, i tipped my hand early on that one didn’t i?)

That’s definitely one of my snarkiest synopses, so it’s probably pretty obvious that I’m not a big fan of this film. I’ll tackle the found footage logistics first. Mixed media? OK. Edited together into a narrative film in a police lab? Including soundtrack jump-scare stings and music? No. No. No. Now, I don’t claim to be an expert on French police procedure, but I’m going to go out on a limb and say that a police video editor would not put a loud-ass soundtrack sting over a GoPro shot of a doll being yanked into the darkness. That’s some gratuitous jump-scaring right there. And it’s not a playful prank either, because Detective Jane rides Anthony’s ass constantly about getting her the next 10 minutes of footage ASAP. (in a bit of what looks like either failed subplot or half-assed red herring) No time for fancy edits! And the tried-and-true ‘why keep filming if your life is in danger?’ question is ubiquitous. Furthermore, ‘how come the killer can’t see your bright camcorder light from more than 3 feet away?’ is another head scratcher. (maybe they live in the first Silent Hill game?) Outside of the found footage slasher (slasher snuff?) film from which Detective Jane is trying to gather clues, we have the non-found footage segments of traditional fictional narrative. They are clumsily written and often hammily (is that a word) played. The whole movie feels like what a teenager with a microscopic budget, a love of Michael Myers, and a weak grasp on the intricacies of human interaction might make if given the opportunity to make a film. And once I researched this film a little bit, I found out exactly why that is. Director, Nathan Ambrosioni, gained some acclaim for making his first feature horror film, Hostile, when he was 14-years-old. That was two years ago. He is a teenager with (presumably) a microscopic budget, a love of Michael Myers, and a weak grasp on the intricacies of human interaction.

The Final Cut: At face value, Therapy is a hackneyed, predictable slasher bogged down by clumsy found footage tropes/common mistakes; an unbelievable premise; and some overwrought performances. Knowing (now) that it was made by a kid, it’s pretty impressive. (impressive in a “a high school kid made this?” type of way)