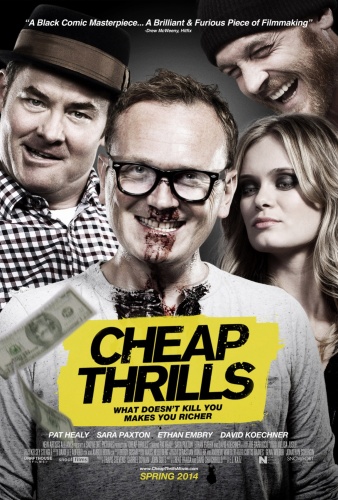 The last review I posted before this one – Would You Rather – got me thinking about Cheap Thrills. Both feature a rich guy using his wealth to encourage (or force) less well off people to do demeaning or reprehensible things. Both feature a great (though very different) rich guy character played by great (though very different) character actors. Both feature a cast of recognizable actors. Despite all of this, there’s not a lot of overlap in the stories or the rich guys’ motivations for doing what they’re doing. And they’re both pretty good. But I’m getting ahead of myself. Let’s get into it, shall we?

Craig (Pat Healy) is a down-on-his-luck blue collar everyman whose latest financial woes send him to the bar to drown his sorrow. While trying to figure out how he’ll keep a roof over his wife and kid, he runs into Vince (Ethan Embry) a friend from back in the day. Their lives took different paths – Vince is a kneecap breaker for a loan shark – and they don’t have a lot in common anymore, but they’re cordial nonetheless. They’re noticed by Colin (David Koechner) and Violet (Sara Paxton) while they’re catching up and invited to have a drink with the couple. It’s Violet’s birthday and they’re looking to have a little fun. Like, paying these guys to do increasingly dangerous/violent/demeaning things for their entertainment. Obviously, this plan works out fine for everyone involved. I’m kidding! It’s goes horribly awry for the two hapless old friends.

I give a lot of credit to films that are fun or have heart. Cheap Thrills doesn’t necessarily have a lot of heart (at least not that i noticed) but it is a shitload of fun. That may sound weird when you consider the plot. It’s dark. Like, pitch black. Craig and Vince are put through the ringer. They turn more and more savage with each new promise of a payout. That’s pretty strong/cynical social commentary right there. It’s downright depressing (on paper). Despite this, the viewer can’t help but cringe/smile each time a new challenge is presented. I understand that the whole idea of a cringe/smile is a paradox, but that pretty much sums up the whole movie. Koechner is gleefully despicable yet likeable at the same time (somehow). And Paxton perfectly alternates between entirely disengaged and engaged while still maintaining an aire of disengagement (somehow). Embry and Healy are seemingly shocked by their own behaviors (somehow). The cast brilliantly plays these opposites to great effect. The audience is even torn between wanting Craig and Vince to win in the end because they’re fundamentally decent guys, and wanting them to tear each other apart as punishment for being so base and materialistically cruel. They are definitely the protagonists, but it’s hard to root for them as we watch them scramble to fuck each other over for money. Of course, we root for them anyway. Because somewhere, deep down, we know that there’s a chance that we would behave in the same way in their situation.

The Final Cut: Cheap Thrills is paradoxically a wildly fun film full of cynicism and a bleak social outlook. It’s funny and cruel and violent and its cast is perfectly suited to the emotional mayhem.