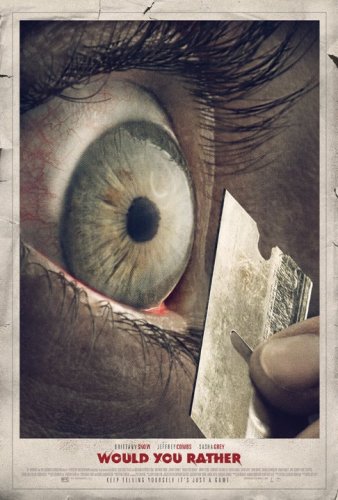 I will often give a poorly reviewed or critically ignored movie a chance simply because it features an actor that I like. Of  course, this has bitten me in the ass on  more than a few occasions. One such actor, Jeffrey Combs, is a genre film icon. He has lent his unique, pursed-lips, uptight-bordering-on-indignant-rage character to some memorable roles. (i mean, he IS the Re-Animator) So, when I saw that he stars in Would You Rather, I put it in my queue. (sure, he’s been in a million films and they’re not all good, but what the hell) Admittedly, I was skeptical of the simple children’s game premise, so I let the film fester in my queue for quite a while before I finally watched it. Now that I’ve seen it, I noticed a few more actors that I recognized – Home Alone’s dad, that funny non-Jason Lee guy from “My Name is Earl”, Victor from “Dollhouse”, Ricky from “Trailer Park Boys”, and that lady from “Ass Eaters Unanimous 19” (and some non-pornographic films).

Iris is a young woman struggling to keep up with the bills from her brother’s leukemia treatments. His doctor introduces her to a local philanthropist (Combs) who invites her for a dinner game in which the winner will be handsomely rewarded. The doc was in a similar financial situation once and he won the game, so it must be legit. She agrees and she and several other people join the philanthropist at his mansion for dinner. The man’s idea of charity (and his twisted sense of humor) is revealed almost immediately when he offers a couple of his guests huge sums of money to demean themselves. When the game begins in earnest, it quickly becomes apparent that the winner will be the sole survivor of the night.

Judging by the trailer, Would You Rather could easily be mistaken for a throwaway, direct-to-video shocker with a weak premise. And I suppose the premise is a bit thin. The whole film is essentially a set-up for some how-far-will-they-go set pieces. That’s not necessarily a bad thing. Plenty of films have used the same formula with some decent results. And sometimes it’s fun to just sit back and be entertained by some gut-wrenching violence. And the film rises (slightly) above the tried-and-true formula in forces its characters into moral dilemmas. Would you rather do something horrible to yourself or something horrible to the person next to you? It’s a device that may push some viewers into a mini-panic attack. We wonder how we would choose and the choice isn’t easy to say the least. Combs is delightfully insane. He smiles and stays civil, even as he forces these hapless people to do the unthinkable for a tiny fraction of his money. He convinces us that he believes that he’s helping these people. Not financially, though he does that too, but to be winners in the worst, Ayn Randian sense of the word. There’s definitely no shortage of social commentary to be had in Would You Rather (and it’s not hard to miss). The philanthropist’s son has learned his father’s take-what-you-want lesson, but he doesn’t see that his father is (dubiously) trying to build the participants up via the same lesson. He has an utter contempt for these “parasites” and no compunction about treating them as such. It’s all pretty dense for a thin premise. Admittedly, there are a few missteps (an improbably rescue attempt, for example), but the film surprised me in its effectiveness. Chalk another one up for Mr Combs.

The Final Cut: Would You Rather rises above its thin premise to deliver some overt social commentary wrapped in violent set pieces. It’s moral quandaries add some extra anxiety, and Combs delivers the pursed-lips, uptight-bordering-on-indignant-rage goods yet again.