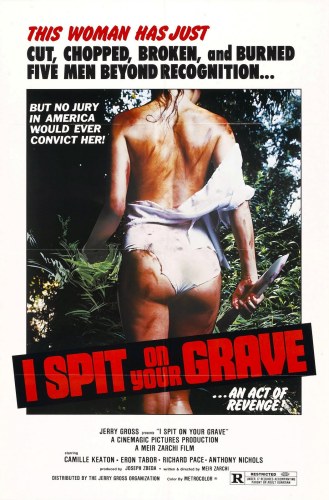 I Spit on Your Grave is a brutal film. It’s no surprise that it was flagged as obscene in the UK and denied license for distribution. (please note that I say ‘it’s no surprise’ rather than ‘censorship is good’) This is one of the few “video nasties” that has endured in the public consciousness (relatively) and has even spawned sequels and reboots and reboot sequels. Why that is, I can only guess. It may be because of the provocative VHS cover art. (i certainly glanced furtively at that cover a few times every time I went to the video store) Maybe it is because the subject matter (rape) so powerfully affects the human psyche. It’s repulsive and supremely reprehensible. But it also involves sex, something that is titillating. So, human brain wires get crossed and we get people who are turned on by it, defend rapists, blame victims, disbelieve victims, and/or worse. (just so we’re clear: rape is bad. always.) It may be because it can be interpreted in several different ways. Is it a feminist empowerment story? It was initially released as Day of the Woman, after all. Is it simple exploitation? Is it a male fantasy of a feminist empowerment story that fails to truly empathize with the victim while substituting murderous loss of humanity with catharsis and healing? (fyi – that’s the one I lean toward) There have been plenty of “think pieces” on the subject. Whatever the reason, I Spit on Your Grave is here to stay. Let’s get into it, shall we?

Jennifer Hill is an author hoping that rural Connecticut is the perfect place to get away from the hustle and bustle of New York City so she can concentrate on writing her novel. Once there she meets a skeevy gas station attendant and his two shitty friends on her way to the summer rental. Back at the house her grocery order is delivered by a clearly intellectually disabled guy who’s sweetly enamoured by her. She spends the next few days writing and chilling. Then the gas station guys show up and force her into the woods where the grocery delivery guy is waiting. Turns out, the are planning a deflowering of their special needs buddy and Jennifer is going to be his first. By force. Grocery guy refuses to participate (at first) and what follows is a harrowing half hour (give or take) of rape and more rape and anal rape and gut-wrenching violence against Ms Hill. The men then leave her for dead. But she’s not dead. And she’s bent on extremely violent revenge.

I Spit on Your Grave features intense, graphic, hard-to-watch violence. That usually earns a film a resounding endorsement from me. In this case, I’m not endorsing this film. (more on that later) As I mentioned in the intro, I think the film is misguided. It falls short of being a paragon of feminist art (way, way short) for a couple of reasons. (the “male gaze” camera work for example) I can’t deny that Jennifer Hill is a pretty awesome (and refreshingly progressive for the time) character. She’s independent, she’s brave, and she’s a professional. She seems happy and determined. She is kind. All of that is established quickly and without contrivance or exposition. The sexual assault that is perpetrated against her is made all the more devastating because of this. That assault is super-fucking horrible. A whole lot of super-fucking horrible.  So, when Ms Hill kills her attackers in increasingly interesting and fittingly brutal ways, the viewer inexorably roots for her. This is not justice, but it satisfies us on a lizard brain level. We can cheer when a filthy fucking shitbag gets his penis cut off, but it doesn’t really help Jennifer. It can’t. She has exchanged her humanity for vengeance. Sure, she can come back from either of her ordeals, but that’s not what the movie is about. it achieves its rape-revenge goal and that’s it. That’s not necessarily a bad thing. And that doesn’t make it a bad movie. In fact, even though it’s harrowing, it’s pretty good. It’s creative. It’s an interesting story. It has some pitch-black bogeymen. But I can’t recommend it without all of the context that you’ve read above. If you read all of that and you still want to watch (or re-watch), then you’ve made an informed decision. And you can’t blame me if you decide it was just too fucked up for you.

The Final Cut: I Spit on Your Grave is certainly one of the best video nasties, but it is extremely divisive among genre fans due to the real-life horror of rape and its graphic depiction of it. (and it is detested almost universally by non-genre fans) Know what you’re getting into before you decide to watch.