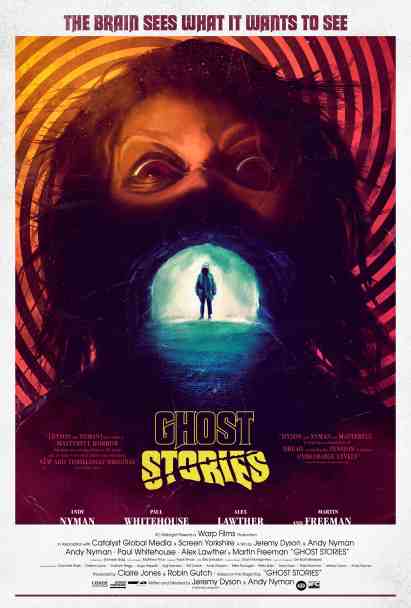 As we all know, anthology horror can be an extremely mixed bag. A single anthology can feature an amazing, top-tier short right alongside a worthless turd. A couple come to mind, but I’m not here to shit on specific titles. (looks like i need to put the breaks on my scatological references too! 2 refs in 3 sentences is a bit much even for me) So, when Ghost Stories came across my (metaphorical) desk, I was psyched out of my mind to watch it. (i’m kidding. i was mildly interested at most) I’ve now watched it and I’m dutifully reporting my thoughts on it to you, dear reader. Let’s get into it, shall we?

Phillip Goodman is a celebrity skeptic and debunker. He’s made a living proving that the supernatural is a fantasy and that any claims to the contrary are hoaxes. When he is contacted by a long-missing skeptic that inspired him to become the man he is today, he is… skeptical. The man has been presumed dead for decades. It can’t really be him. Or can it? Either way, he’s not he same man that Phillip remembers him to be. He’s no longer a skeptic. He cryptically tosses Phillip a folder of the three supernatural cases that changed his mind. Now it’s up to Phillip to look into them himself. And he does. He interviews 3 men who recount their ghost stories (obviously) to the non-believer. First a night watchman’s tale of creepy abandoned hospital mysteries. Then a very tense young man’s account of the strange creature he hit while driving on a rural road late at night. And finally, a posh gentleman’s story of the strange events surrounding the birth of his child (or is it a child?). Phillip’s skepticism is tested when the eerie stories seem to start affecting his own life. As his reality starts to unwind he becomes more and more desperate to find the answers that may lie outside of his realm of understanding.

Ghost Stories is based on a play, but you wouldn’t know it from watching the film. Which is neither good nor bad. (i just thought i’d get that out of the way) The film holds its own cinematically. It especially excels in the creepy lighting category (that’s an oscar category i think). The flashlight lit shots of the abandoned hospital in particular are creepy as hell! The film does a superb job of ratcheting up the tension of each of its stories within a story. Despite the disparate points of view of the storytellers, the film does a good job of weaving them together seamlessly. It doesn’t even feel like an anthology. Phillip’s investigations are believable and we’re transported into each story through flashback, so the flow of the overarching film feels very natural. Each entry, as well as the bookending story of Phillip, is solid. The performances are too. Martin Freeman puts in a good turn (as one would expect) but Alex Lawther steals the show as the extremely overwrought young man recalling his encounter with an otherworldly beast in the woods. He has a darting glance and paranoid demeanor that really sells the trauma of his experience. He seems like the type of person who would be a nervous dermatophage. It’s cringeworthy (in a good way). It’s not all great performances and mood-perfect lighting though. There is a bit of cheese here and there and the epilogue / wrap-up may leave some viewers disappointed. But there’s plenty to love about this eerie anthology.

The Final Cut: Ghost Stories is an anthology film that makes the most of its runtime with haunting visuals, engaging stories, and solid performances. Some viewers may not love the ending, but the journey to get there is worth the price of admission.