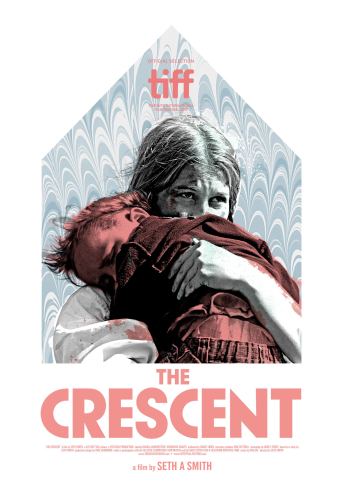 Next up in my suite of reviews for the Brooklyn Horror Film Festival is the Canadian film, The Crescent. Let’s get into it shall we. (yes, i am aware that my intros for festival reviews are pretty weak. if it upsets you to miss out on my rambling about things like ‘i thought The Crescent was Hagazussa when i started watching it but it wasn’t!’, then that’s just too bad.)

A woman and her toddler retreat to an isolated lake house after an accident that takes the pater familia away from them. The place is big and closed up and a bit creepy, but they settle in quickly enough. Mom’s seems to be postponing her grieving by losing herself in marbling – a fairly complicated process of making beautiful paintings. Kiddo spends his days toddling around (as toddlers are wont to do). Everything seems fine, if a little grim, until a local girl mentions that some people around there don’t want to stay dead. The creepy old dude who offered to babysit and/or take the kid swimming (yeah) seems even creepier now. It soon becomes apparent that that little girl wasn’t just talking nonsense.

The Crescent opens with gorgeous colorful shots of the marbling process and a haunting, jarring score. Even the title card is amazing, with a uniquely fitting font. (or maybe typography? i don’t know what the hell i’m talking about). These shots of paints spreading, mixing, and overlaying return a few times throughout the film, making for a mesmerizing cutaway that maintains a dreamy, dreadful mood. That mood is pervasive throughout this story. The bright, intricate art contrasts perfectly with the grey, dismal beach house and its surroundings. The audience can feel that the dam holding mom’s sorrow back is bound to break. Her complicated mess of emotion is reflected in her marbling, despite her numb demeanor. But there’s something else there too. Nothing is quite right at the house. And the few locals that mom encounters could be poster children (metaphorically. they’re adults) for ‘not quite right’. Once her grief and heartache get the best of her, she takes some drastic actions that are both shocking and confusing. The film’s final act serves up a conclusion that is both surprising and somewhat hopeful. (in case you’re wondering, i’m being vague on purpose)

The Final Cut: The Crescent is an eerie slow-build horror story with dreamy visuals and a haunting score. It very effectively uses physical and social isolation to amplify the universal grief of having lost a loved one.