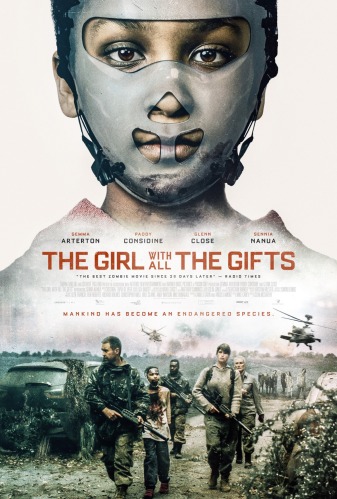 Zombies and zombie movies are ubiquitous. Over the past decade we’ve seen an explosion of zombie imagery and references in popular culture. It’s understandable then that the theme is wearing thin with a lot of horror fans (and probably normal people too, but i can’t speak for those weirdos). As such (and this is revealing a bias on my part), zombie movies tend to slip by me unwatched. So, when I heard some good things from some reliable folks about The Girl With All the Gifts, I mustered just enough enthusiasm to make a mental note to check it out at some point (and no more). Since I’ve seen approximately 84,000 zombie films, and since the trailer placed the film firmly in that subgenre, I wasn’t going to break my neck trying to see it no matter how high the production value looked. Now you know how I went into the film before seeing it. You’re probably super psyched to find out what I thought of it. Well, you’re in luck. Read on!

The population of London (nay, the world) has been devastated by a fungal infection that, once contracted, instantly turns people into “hungries”. Hungries are fast zombies for all intents and purposes. Melanie is one of the children born with the infection. She, and others like her, are not like the fast zombie feral creatures that people become when they contract it after they’re born. She seems like a normal little girl. A bright, polite, friendly little girl. Her teacher, Miss Justineau, takes a shine to her. But, in the maximum security research facility where she lives, fraternizing with the infected kids is frowned upon. So much so that the rule is enforced by military personnel under the command of Sergeant Parks. The whole operation is overseen by Dr Caldwell, who is working to find a cure for the infection and thinks the kids may be the key she needs to solve the epidemiological puzzle. When the place is overrun by hungries, Melanie, Caldwell, Miss Justineau, Parks, and a couple of army dudes escape. Will Melanie give in to her intense urges to bite people? Will Caldwell find the cure no matter the cost? Will Miss Justineau’s affection for the child betray her? Will Sargent Parks ever stop being an asshole?

The Girl with All the Gifts is a solid PG-13 (it’s not really PG-13 but it feels like it is) fast zombie action thriller. Now, before you lace your fingers together and crack your knuckles in preparation for firing off a contrary letter to the editor, let me justify that zombie label. Sure, these bitey humans are not strictly zombies. It would seem that they’re still alive, for one thing (at least at first). They’re more like the Rage infected folks of 28 Days Later. This infection is fungal, which lends a bit of believability to the story. Some infections do cause animals to behave in strange and sometimes self-injurious ways. (for example, do you like cats? well, then you’re probably infected with toxoplasma gondii [citation needed]) “Zombie” is just the easiest way of referring to and describing these people. So, what does “solid” mean, you may ask. Well, the photography is serviceable. The story is fine. And the action is competently, but not uniquely, shot. If it weren’t for the above-average performances, the film would rate a low C. But the main characters shine. Paddy Considine turns in a great performance as the complex sergeant. Glenn Close is a multi-dimensional villain(ish) doctor. Gemma Arterton is a believable mother figure. And young Sennia Nanua is great as the sweet kid who happens to be driven to eat living flesh. Those performances of well-written / well-rounded characters push the film to a mid-B letter grade. (apparently, i’m doing letter grades now)

The Final Cut: The Girl with All the Gifts is a decent story with standard fast zombie action and thrills that is somewhat elevated by its fully-developed characters and the great performances of its cast.