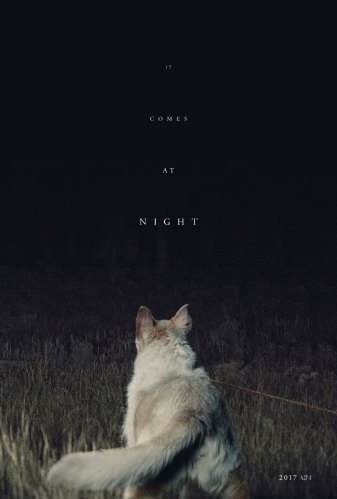 I’ve mentioned A24’s batting average (SPORT metaphor!) here before. It’s good. Like… shit. I probably should have looked up good batting averages before I started this. Nonetheless! Let’s just say it is the Mighty Casey of studios. They are constantly…Shit again. Casey struck out. Oh, I know! It’s the MIchael Jordan of… You know what? I’m bailing on this whole baseball thing. They’re good. Really good. I’ve liked everything I’ve seen from them. Granted, I haven’t seen everything, but I’ve seen a few movies from them. Now I’ve seen their most recent release – It Comes at Night. Does this one live up to the high standards set by A24’s past releases? Well, I guess that’s why you’re here, isn’t it? Let’s get into it, shall we?

A family of three has boarded themselves up in a house deep in the woods for unknown reasons. People are getting sick and there seems to be no way of determining how or why. They’ve decided that it’s best to go out only during the day, only in pairs or more, and with their gas masks and gloves on if something seems amiss. When a man forces his way into their house one night, they take great pains to ensure that he is not one of the infected before deciding to help him by allowing his family of three to live with them in the relative safety of their stronghold. As many a masque attendee could tell you, that shit can’t protect you forever. In this case, will it be distrust and paranoia or infection that proves to be our protagonists’ worst enemy?

Director Trey Edward Shults has crafted an absolutely dreadful film with It Comes at Night. And I mean that in the “causing great fear” sense of the word. He captures and conveys the characters’ fears perfectly. Captured through the expressions, glances, tics, and (of course) actions of these put-upon folks played skillfully by the sparse cast. And conveyed through haunting shots of woods illuminated by darting flashlight and through shots without a clear object focal point which leave the viewer scanning madly to figure out what the hell is causing such anxiety. The film is a master class in nightmarish photography. There are literal nightmares depicted as well. And with startling impact. These surreal moments put viewers on edge and serve to ratchet up the anxiety and fear inherent in the story. Can security be had in this world? Answers don’t come easy to either Shults’s characters or to the audience. That deliberate caginess is a powerful device aptly used in this film.

The Final Cut: It Comes at Night is a piano wire taut paranoia story that maintains its dreadful atmosphere from start to finish.