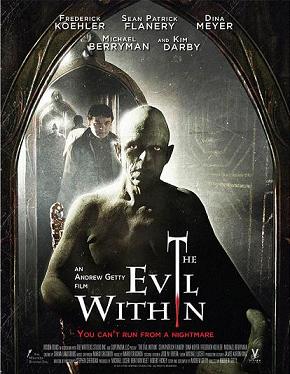 At this point, who hasn’t heard of the craziness that got The Evil Within to horror fans’ screens? A meth-addled “old money” heir. A Hollywood mansion turned into a studio. A 12+ year post-production period. All to get Andrew Getty’s nightmare vision to the screen. A feat that he didn’t quite realize before he died. Luckily for us, people close to the film (and the man) took his life’s work and released it to the world. Now it’s on VOD across several platforms. But there’s no possible way that it could be good, right? With all of that obsessive tinkering? Well, let’s get into it shall we?

Dennis is cognitively challenged. He lives with his brother, John, in a mansion in Los Angeles. Dennis is a pretty independent young man, but John provides some needed support. Sometimes he oversteps though. As when John buys an antique mirror for Dennis’s room in order to make the house look a little classier. But Dennis rails against it, arguing (rightly) that his room is his to decorate. After some reflection (YEAH! PUN!), Dennis decides to keep the mirror after all. He even starts talking to the mirror. Sharing his thoughts and emotions with his reflection as one would with a diary. Dennis is quite happy with the thing even when his reflection starts talking back to him. And his reflection isn’t hampered by cognitive disability. So, Dennis begins to defer to the image, following its advice and falling prey to its manipulations. Dennis soon finds out that his reflection isn’t really him at all. It’s something else entirely and it claims to hold the secret to “curing” his disability. It just so happens that cure involves a lot of killing.

Getty may have had chemical dependency issues that pushed him over the line from meticulous to obsessive, but it is acutely obvious that The Evil Within is a labor of love. It has the rough-edged charm of outsider art. Sure, the performances are wooden (though, Michael Berryman and Frederick Koehler turn in decent performances) and a lot of the shots are flat, but it still draws the viewer’s attention. It fascinates in an unironic way. It’s outsider art worthy of a museum rather than outsider art worthy of ridicule. (think: Henry Darger vs Birdemic) The film is just slightly out of line with our subconscious familiarity with the usual cadence and flow of a film. The result is that the viewer never quite settles into a “groove”. It makes for a low-level anxiety from the start. As Dennis’s actions get darker and more murderous, that anxiety increases incrementally. And his naivete and his desperation makes his plight all the more tragic. What really pushes The Evil Within over the line into masterpiece territory (ok, that’s hyperbole. i admit it) is in its creature effects. The climax of the story features some bonkers puppets and creatures. They’re huge. They’re ugly. They’re perfect. They evoke nightmares that we all may have had. Which is what the film ultimately is. A nightmare. Weird logic. Strange editing. And fight-or-flight inducing monsters.

The Final Cut: The Evil Within is a tortured artist’s attempt at putting nightmares to film. It’s not technically adept, but it works as a tragic horror story with a lot of heart that is worth checking out.