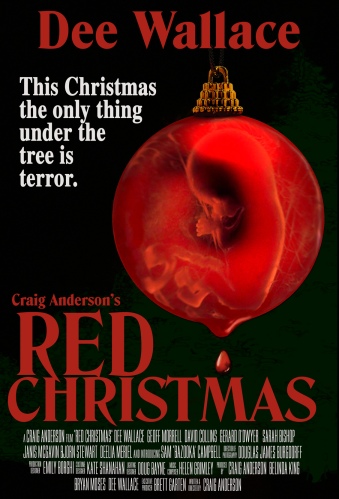 Next up in my Fantasia International Film Fest 2016 review series is Red Christmas. Another film that I was unaware of until I saw the trailer on the Fantasia Fest site. It looked pretty crazy and like it had plenty of high-pressure blood fountains. So, I was convinced. (natch)  It’s an Australian film that stars an American actress (with an American accent but a “bloody” or two thrown in for a touch of Australia-ness) and a dude in a Chicago White Sox baseball cap (i honestly thought the only sports Australians liked were their weird football, cricket, and throwing rocks at things). Let’s get into it, shall we?

Now that Diane (the illustrious Dee Wallace) is a widow, she’s hosting Christmas at the family home one last time before she sells it. She gets her biggest wish – that all of her family shows up. ALL of them. Even Cletus, the relative nobody knew about. And he’s a bit peeved that he doesn’t get the motherly love he desires. Like, murderously peeved.

Red Christmas isn’t a bad film. It has some funny moments, some gruesome moments, and some heartwarming (-ish) moments. It features a great Dee Wallace performance (scene chewing at its most delightful). There are scary moments too. Unfortunately, the tone of the film is a bit muddled. The film definitely has some madcap kills and some goofy one-liners. But it also has some cloying and/or overwrought family bonding and/or bickering. And not in the zany way that you might expect from a film in which a dude gets his dick punched off. Red Christmas is a niche film that never really finds its niche. Is it a willfully offensive gross-out comedy? Is it a gore vehicle? Is it a family drama? A siege film? A slasher? A supernatural thriller? (how did the limping, malformed Cletus get into the house so quickly/easily) A morality tale? A cautionary tale? Propaganda? It’s impossible to tell. And what’s up with the wildly disparate “further reading” and “further watching” lists in the credits? October Baby? Seriously? After I just watched a woman get chopped into symmetrical halves with one blow from an ax? It’s perplexing to say the least, and it removes the viewer from the story. (not the credits part. the tonal shifts)

The Final Cut: Red Christmas features some decent, bloody set pieces strung together by a tonally incoherent family drama. Dee Wallace’s performance is top notch even if her’s is not a very nuanced role (some great scene chewing though).