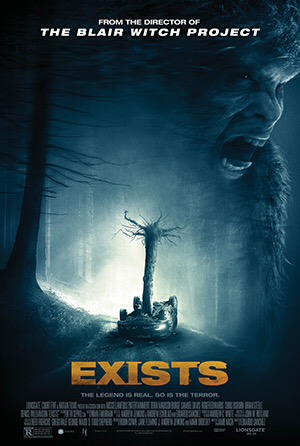 At some point in the recent past, I was down a Sasquatch films rabbit hole online. I was surprised to find that there is no shortage of films about our beloved North American skunk ape. I’ve forgotten why I was down this particular rabbit hole. I’m not a particularly huge fan of Bigfoot or cryptozoology in general. I’m not even super keen on crypto-creature features. Whatever the reason, the result was that I put Exists in my queue. All I knew going into it was that it is Sasquatch-themed and found footage. So, obviously, when I got the disc in the mail, I wondered why the hell I would ever put something like that in my queue. I dutifully watched it despite my reticence. (you’re welcome, dear readers) Here’s what I thought.

A group of friends – two couples and a fifth wheel, tag-along brother of one of the guys – heads out to a cabin in the woods for a rustic getaway. The tag-along doesn’t have a girlfriend, but he does have an obsession with recording EVERYTHING on video. He sets up GoPros at each new location, straps them to helmets and bikes, and he has a few handheld cameras for good measure. He and his brother know something that nobody else does about the location where they plan to spend the next few days. Namely, it’s a Sasquatch hotspot (justification for the constant recording i suppose) and they’ve been warned to stay away by their uncle who owns the cabin. They hit something with their truck on the way to the place. Turns out that something was a Bigfoot. Their provocation will not go unanswered by the normally peaceful creature.

Exists has some very intense moments of peril and heightened anxiety. The hapless 20-somethings are believably stranded when their truck is destroyed far away from civilization (and cellular service range. though, admittedly, those are basically one and the same). When they come under attack by an (initially) unseen menace, they barricade themselves in the cabin. They try everything – sending a scout to try to find cell service, sticking together, making a run for it – to no avail. It’s a testimony to the writer’s skill that I felt like I would do most of the same things if I were in their position. That shouldn’t be remarkable, but it is when so many films suffer from preposterous character logic. So, it’s especially frustrating to be distracted by the central conceit of the film – that these young people ALL take such great pains to catch their most perilous and deadly ordeals on video. Especially since it’s well-established that only one of the group is particularly interested in making the videos in the first place. When Sasquatch is chasing you through the goddamn forest, your mind cannot possibly work well enough for you to get him center-frame all the way until he claws the GoPro out off your hand! Please, every filmmaker, (please!) ask yourself why you are shooting found footage. Does it make sense for your characters to actually get the cool shots that you want to include? No? Then don’t do it! It’s profoundly distracting and only adds fuel to the “found footage is garbage” side of the found footage debate. Now, to be fair, director Eduardo Sanchez has some experience with found footage. He’s half of the directing team that brought us The Blair Witch Project. But leaning on a film device that you helped popularize is no excuse for bad storytelling. But I’m getting off on a tangent/rant here. Exists actually gets a lot right. It’s scary. It has some well developed characters. And Sanchez cleverly keeps the creature obscured in brief glimpses for most of the film, giving viewers just a taste of monstrous terror. (until he shows it, thereby shattering the mystery and making the thing look a bit ridiculous)

The Final Cut: Exists is a surprisingly decent crypto siege film that suffers from its own unbelievable found footage format.