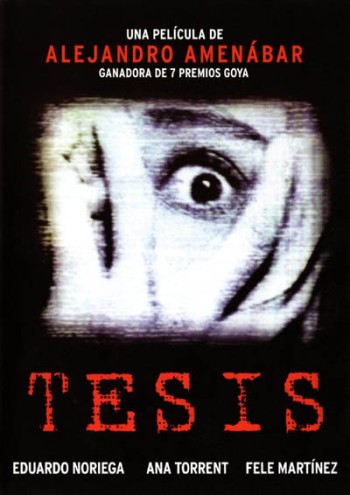 Tesis is another in a long line of movies that I get in the mail and wonder, “What the hell is this?” This phenomenon is a product of late night, bleary-eyed expeditions through lists of underrated/underappreciated/little-known/foreign/etc. genre films. It makes getting the mail all the more exciting. (by that, i mean, more exciting than getting bills) So, what’s Tesis? Well, it’s a film by Alejandro Amenábar, the director of Open Your Eyes (remade in the U.S. as Vanilla Sky) and The Others. Not bad. Let’s get into it, shall we?

Angela is a film studies graduate student who is in the early stages of developing her thesis (that’s the title, guys!) on violent images.  In her quest to find the most violent media, she asks her advisor to look in the school archives for violent pornography. He reluctantly agrees, lies his way into the stacks, and pilfers a mysterious tape from a hidden room. Whatever was on the tape was so shocking, it kills him! (with asthma triggers) Angela finds the guy and takes the tape instead of calling the cops. A horror/violent images aficionado, Chema, figures out what happens and socially blackmails her into showing him the tape. It turns out to be a snuff film. The two form an unlikely alliance to track down the killer. Could it be pretty boy, Bosco, who has the same camera the video was shot with and an intense personality? Or maybe the professor taking over the dead guy’s classes who smokes while teaching and acts generally suspicious? Or it could be Bosco’s insanely jealous girlfriend who threatens any woman he talks to. Hell, it might even be Chema!

This is a tight Hitchcockian thriller. Angela’s fear and paranoia are palpable throughout the film. More interesting though, her fascination and desire are also ever present. She is drawn to depictions of violence despite proclaiming an aversion to them. She can’t help but peer through her splayed fingers as she covers her eyes against the brutality. Angela’s fascination transfers to real life violence and danger as she puts herself in potentially lethal situations. She allows Chema to talk her out of involving the police despite that being what any rational person would do. This sounds like a contrivance, but it actually fits her character. The term “psycho-sexual” comes to mind. And in a more overt way than Hitchcock’s best known films. (think, DePalma imitating Hitchcock. ie: Dressed to Kill) She is inexorably drawn – mind and body – to the man she suspects is the masked figure in the snuff film. Tension mounts as she gets closer and closer to the killer’s identity. Angela (and the viewer) is kept guessing until the very end, when Angela confronts her attraction to violence head-on.

THE FINAL CUT: Tesis is a taught psycho-sexual thriller. There are suspenseful twists and turns throughout that keep the viewer guessing until the very end. This smart, well-paced whodunnit should appeal to wide audiences and the grisly subject matter will satisfy horror fans.