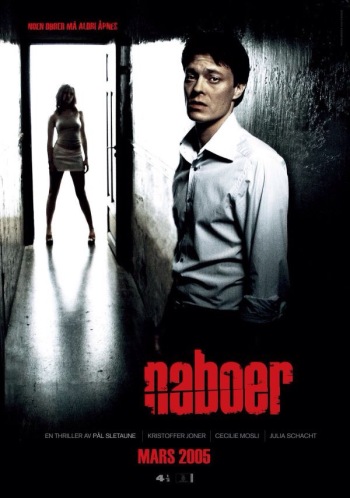 Naboer is a Norwegian film (or Swedish?) that I came across during a particularly deep foreign (non-U.S.) horror research rabbit hole. After having seen the movie, I would hesitate to call it horror. It’s horror in the same way Repulsion is horrific (with which it shares some tonal similarities). It features violence and psychological drama (a stupid term, maybe psychological manipulation drama? or damaged mind drama? no? ok.). Genre classification aside, this movie will appeal to horror fans and deserves to be seen.

John’s girlfriend has just left him, leaving him broken-hearted and confused. What did he do wrong? What will he do with himself now? During this vulnerable time, he runs into his next door neighbor (eh? from the title?), Anne. She is a gorgeous young woman and she’s friendly. Perhaps too friendly. (and it’s important to the plot that she’s gorgeous, by the way.) She invites John into her weird, cluttered apartment where he meets Anne’s also-gorgeous roommate Kim. The two act very strange and seem to know a lot about John. He (and the viewer) becomes uncomfortable (but also titillated) and he excuses himself. The next time he runs into Anne, she asks him to come over again to help her keep an eye on her sister for vague reasons. When he enters the apartment again, things really get strange. He gets lost among the claustrophobia-inducing clutter. He has a VERY bizarre sexual encounter that becomes violent and triggers some flashbacks. The rest of the film slips deeper and deeper into head-spinning confusion and revelation. In the end, we come to see just how damaged John is psychologically. (hence, psychological drama!)

This film’s (and the protagonist’s) disorienting reality and dream logic create an intense anxiety in the viewer. We are (by design) just as confused as John. This is a success for director, Pal Sletaune, as I’m sure this was his aim. He has crafted a film that is meticulously organized in its depiction of a disorganized mind, giving the viewer a taste of that nightmare without compromising narrative drive. Naboer never leaves the viewer behind despite being rooted firmly in John’s torn psyche – torn both from his heartbreak/betrayal and his surreal experiences with his neighbors. (torn psyche drama?) And the neighbors really sell the insanity of John’s experiences. Cecilie A. Mosli (as Anne) and Julia Schacht (as Kim) play their roles with gravity and (sometimes violent) intensity, never letting the absurd become ridiculous.

THE FINAL CUT: Naboer is an intense, claustrophobic head-spinner that keeps the viewer guessing right up to the end.

(Note: The film contains sexual violence that is very difficult to watch. It’s not on an Irreversible level, but it’s disturbing nonetheless. The context of the film justifies the violence, but it must be seen in its entirety for that to become clear.)