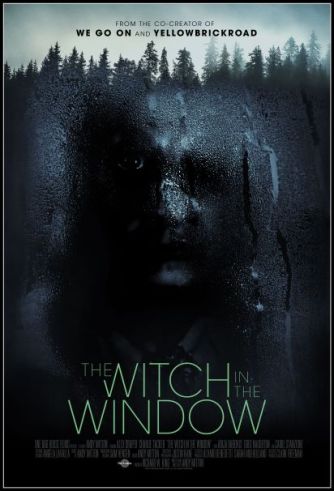 One last (late) full review from my coverage of Fantasia Int’l Film Festival 2018. It’s been a lot of fun to put my thoughts to the screen for you, dear reader. And I’m going out on a high note with The Witch in the Window, directed by half of the duo who directed YellowBrickRoad and We Go On. I reviewed the latter film during Fantasia 2016 (as you will no doubt recall). Time flies I guess. Well… let’s get into it, shall we?

Simon has custody of his son, Finn, for the summer and the two are spending it far outside of the city fixing up an old farmhouse. Mom’s only too happy to get a break from the kid who has been ignoring computer usage restrictions and saying hurtful things. As the two males bond, it becomes apparent that things aren’t quite normal at the farmhouse. They chalk it up to old house sounds and isolation nerves. When the neighbor tells them that the creepy old lady who used to live there was a suspected witch who died in there, isolation nerves become haunted house nerves. It turns out those nerves are warranted. Dad sunk everything he had into the house and pinned a lot of hopes on it, so he won’t give the place up easily.

This film is the most accessible of the three films that I’ve seen directed by Andy Mitton. I don’t know if that has anything to do with him being solo for this film or not. I also don’t know why he’s solo. (guess we’ll never know. this is a review blog, not a co-director relationship blog after all) What it gets right is its simple, straightforward premise – a haunted witch house. By eschewing the high(ish) concept horror of his previous features, Mitton has made a film that delivers some pretty universal scares. That’s a good and a bad thing though. For casual viewers, the film will be a good date night movie. For hardcore horror aficionados, the film is a predictable but entertaining distraction. Either way, the story doesn’t command one’s full attention. There are some great scares and effective moments of tension. The father and son main characters are even likeable enough. But ultimately the film offers nothing revelatory or particularly unique. It exists as a decent – enough mediocre haunt film with a familiar small town witch lore as its shallow, ill – defined mythology. And sometimes that’s all you want from a movie.

The Final Cut: The Witch in the Window is a fine haunt film with decent stakes built up by likeable leads and a sufficient backstory. It’s good enough. Just… good enough.