It’s been a while since I reviewed a book, and now seems as good a time as any to return to literary criticism here at NoRealDanger. (pretty, hoity-toity, huh?) I was deciding on a good book to review and realized that I would be remiss if I didn’t share with you one of the most horrific, gut-churningly terrifying books I’ve ever read – “Zombie” by Joyce Carol Oates. Man, that book is insanely good. And insanely hard to read. Especially if you’re a parent. (i am) I don’t mean that it’s full of big words or weird James Joyce narrative fuckery. I mean, its subject matter is fucking brutal. But then I thought, that what I’ve written above would be plenty of review. You now know that it’s fucking brutal. It’s terrifying. It’s horrific. And it’s hard to read. If those are some of the things you look for in a book, then you’ve made your decision. The only thing you’re missing is the above mentioned subject matter. (and this is where i may lose some readers. sorry, hypothetical lost readers) It’s about a guy trying to lobotomize somebody to use as a sex slave. So, you know, cheery stuff. Now that we have that out of the way, and (i’m assuming) some of you are still around, I’m going to throw a big ol’ twist into this post. I’m NOT reviewing “Zombie”! Instead, I’m going to review a book with a similar topic – “The End of Alice” by A. M. Homes. (i can just imagine your confusion. ‘Whaaaa…’ you gasp, mouth agape. and i’m just smiling away knowing that i just Shyamalaned you) 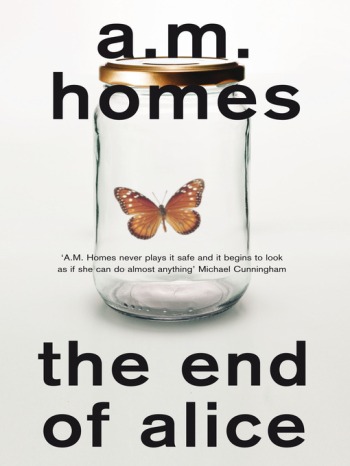 “The End of Alice” is partially told through correspondence between a nineteen-year-old girl and a middle-aged prisoner. She reaches out to the man because he has some experience in an area that she’s hoping to get into – molesting children. You see, this nineteen-year-old girl needs advice on seducing her twelve-year-old neighbor. The letters are explicit and the sections of the book told in third person – the girl’s exploits – are too. Very explicit. There’s rape, prison rape, statutory rape, child molestation, child decapitation, and more. All penned in such a sympathetic way that you’ll feel dirty after reading the book.

This book has a surprising number of fans. It was recommended to me by a friend and it has a decent rating on GoodReads. It’s surprising because it’s not good at all. Sure, homes has written this well, but… I just don’t buy it. It seems to me that she just really, REALLY wanted to shock you out of your cozy, middle-class, suburban old navy socks with this one. She tried excruciatingly hard to crawl under your skin and blow your mind with the depravity of her imagination. Well, I’ll tell you what -it’s just too obvious that that was her mission. I mean, there are some incredibly detailed sex scenes in the book and all of them involve a minor – a pre-teen minor. And if that doesn’t freak out the squares, there’s also some S&M and other deviant sexual activities to make ’em faint. (yeah! take that, soccer moms!) I don’t want to sound too jaded or whatever but i just wasn’t impressed. I imagine that Homes was hoping to be the female de Sade. (that’s just my imagination. so, don’t sue me for libel, Mr de Sade) Well, she’s sure written a pornographic tale here that delves WAY into taboos. To what end? de Sade was a political/(a)moral extremist. Is Homes? Is she taking a political or moral stance with this novel? Almost certainly not. If she is, it’s so buried in the deliberate shocks and contrived deviance of her story that it’s unrecognizable. If you want to read a much better story written by a woman and told from the perspective of a male pedophile, (can you guess what i’m going to say?) read ‘Zombie’ by Joyce Carol Oates. This book is just a much less subtle trek through already explored territory.

The Final Cut: Read “Zombie” by Joyce Carol Oates and skip “The End of Alice” by A. M. Homes.