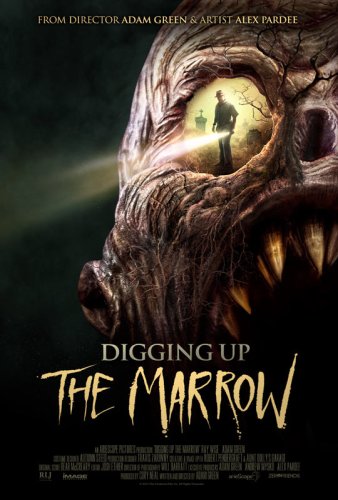 When I saw the trailer for Digging Up the Marrow (a lot of my intros start like that, huh?), I thought it looked like an interesting story. Director Adam Green’s Hatchet was pretty good (though I didn’t stick with the franchise after Hatchet II) and Frozen looked decent and I’ve been meaning to check it out. So, I thought it must be ok at least. Besides, Ray Wise is in it, an he was in “Twin Peaks”! I eventually checked it out. And now I’m telling you about it. Hooray!

Adam Green plays himself as he procrastinates on writing the next season of Holliston by following up on a letter he got from a man claiming to have proof of real monsters living underground in a place he calls “the marrow”. (that’s part of the title!) The guy, William Dekker (Wise), is a little eccentric, but he has an interesting story to tell, so Green and his producer decide to record their interactions with him and make a documentary out of it. Dekker’s stories and commissioned sketches can only carry a documentary so far though, so Green convinces Dekker to take him to the hole in the ground that serves as one of the entrances to this alleged Midian. Dekker agrees but he is super adamant about not disturbing the “monsters” (he claims they’re not monsters, they’re just misunderstood super-deformed humans who sometimes kill people) in any way. But that means the filmmakers can’t really get any shots of the things. Of course, the guys ignore Dekker’s warnings. Then the shit hits the fan.

Let me get my complaints about this film out of the way right at the top so I can end on a high note. The acting, with a few exceptions, is pretty annoying. I say annoying instead of bad because I honestly think it was intentional given the faux documentary format. (notice I didn’t say found footage here. found footage films are derided in a good-natured way in the film and Green says it’s not found footage) Green is playing himself. A director. Not an actor. His wife (now ex-wife according to IMDB) is playing a wife who happens to be hot and walk around in a bikini or underpants depending on the time of day. Not an actor (before you send hate mail – i know she is, just not for this film). Many, many horror industry types play themselves not acting. All of it amounts to a self-conscious style that plays just a little distracting. Nothing deal-breaking, mind you. Just distracting. Ray Wise is great as the paranoid weirdo though. The film has a bit of a pacing problem as well. It takes just a bit too long to get into the real scares. This might also be deliberate since this is a faux opportunistic documentary. The tangents that take the viewer out of the action actually serve to delve deeper into the Dekker character’s background. Something that would certainly be done in an authentic documentary. So, to recap so far, my two main complaints are about stylistic choices. Something that can be chalked up to a difference of opinion rather than a misstep by the filmmakers. Now, the high notes: The creature effects and sketches are some of the most creative I’ve seen (and their names are creatively un-creative too!). When they’re revealed, through brief glimpses, they are terrifying. I even jumped a couple of times. And every time the shit did hit the fan, I clenched my jaw like I was about to be hit, and then I smiled afterward like a person who’s just seen a really cool-but-dangerous trick pulled off. (like a drunk guy jumping from one fire escape to another)
The Final Cut: Digging Up the Marrow is an engaging faux documentary story with a largely non-actor (or non-acting) cast – a fact that may bother some viewers. The creatively terrifying creature effects more than make up for any minor annoyances.