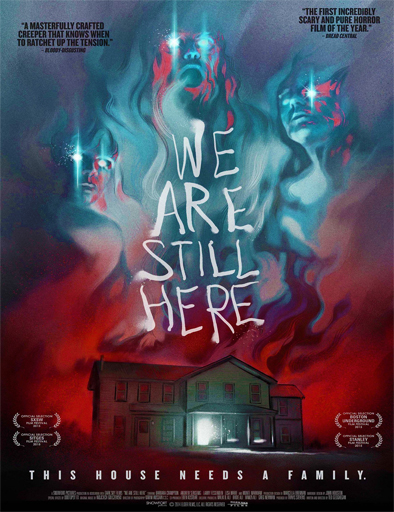 Ted Geoghegan is a nice enough guy to send me screeners every once in a while for films that he’s doing PR for. We Are Still Here is a film that I’ve had on my “to watch” list for a while now. How are those two sentences related? It turns out, Geoghegan directed We Are Still Here! (what a small world, huh?) I’d heard (and by ‘heard’, i mean ‘read tweets’) some very good things about the film when it played at South by Southwest 2015. And from people whose opinions I respect, no less! So, until I found out that Geoghegan was the director, I was stoked to see it. Once I found out though, I was a little reticent. What if I watched it and didn’t like it? I’d have to post a negative review or else I’d be depriving you lovely people of the pleasure of reading my review of the film. And if I did post a negative review, would I ever get a screener again? What a conundrum! I’m obviously writing a review now, so this tense will-he-won’t-he nail-biter is a bit anticlimactic. Why not sit back, sip some tea or Dr Pepper or whatever, and read what I have to say about it?

Paul and Anne (Barbara Crampton!) have just moved from the city to a house in the country. The move comes on the heels of their son’s recent fatal car accident. As soon as they get settled, strange things start happening. Noises come from unoccupied rooms. Pictures fall. An electrician is burned into unconsciousness. You know, the usual old house settling in its foundation stuff. Their hippy/spiritualist friends come up for the weekend to visit (and to make contact with what Anne thinks may be her son’s spirit). Things don’t go so well.

This film definitely wears its influences on its sleeve. It has a fun 70s Italian horror vibe throughout, with some nods to Fulci and Mario Bava. (evident in the pacing, line delivery, and story elements) I also thought Anne’s tenacious insistence that her son’s spirit is among them was reminiscent of Rosemary’s Baby in tone. That’s not to say the film is hackneyed or overly derivative. In fact, the film is so much fun because it’s influences are so front and center. It’s a loving homage done right. It doesn’t crib or reproduce, but the films and era that it evokes are there, just under the surface. And in some moments, right there on the surface! Indeed, Geoghegan’s haunted house features very current (and perfectly terrifying) visual effects right alongside bright red sprays of classic 70s viscera. The story exists within its own mythology of ancient powers that are never quite explained (in a good way). Tormented souls inhabit its evil epicenter with their milk white eyes shining from burnt-to-a-crisp faces that give off the occasional spark. From the outset, the We Are Still Here house is steeped in mysterious unease until it becomes a full-blown, fight-for-your-life madhouse at the climax. Actors scream, run, spit, menace, scramble, and meet nasty ends, much to the viewer’s delight. Larry Fessenden and Monte Markham in particular play their roles to the hilt. Sure, the uneven acting (deliberate?) could be distracting to some viewers, but this movie was a ton of fun!

The Final Cut: We Are Still Here is a blast of a haunted house movie with some great effects and intense violence. If you’re a fan of classic horror – Italian horror in particular – you’ll love this loving homage.