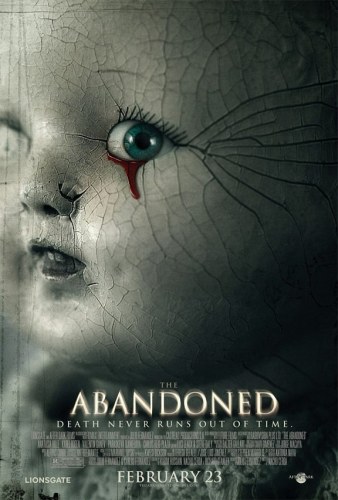 Writing about the After Dark Horrorfest got me thinking about The Abandoned. It was part of the ADHF first year lineup of films. In fact, it was the first ADHF movie I saw. It set the bar unrealistically high for the “8 films to die for” program. The only other film I caught from that inaugural year was The Hamiltons. And that nipped my “fest” optimism in the bud. It’s not that The Hamiltons is terrible. It’s just no The Abandoned (and, honestly, not super-great on its own) . I was excited to see The Abandoned because I’d appreciated the director, Nacho Cerda’s, previous efforts – the shorts, “Genesis” and “Aftermath“. “Aftermath” in particular is an intense, visceral gut-wrencher that left me squirming uncomfortably in my seat. (so, it was great in other words) Going into The Abandoned, I knew none of the actors or even what the story was about. I’m glad I went in blind. It was a fun ride made all the better because I didn’t know where the next twist/turn was headed.

Marie finds that she has inherited her birth-family’s house in the Russian countryside. She was adopted and grew up not knowing her biological parents. She hasn’t been back since she was a baby, when her mom fled her abusive father with her and her twin brother.  She travels to the property to find it run down and dismal. (bummer) To make things worse, she catches a glimpse of someone in the house. When she encounters the “person”, it looks exactly like her! Except the specter is dead-looking, with milk-white eyes and a sallow complexion. (i mean, you know, more sallow than the sallowness from just living in rural Russia) While trying to escape (futily, since the property is an island and the rivers are flooded out), she meets Nikolai, her brother. They were adopted separately and he has obviously led a less refined life than Marie. He’s also been told that the house is his inheritance. AND, he has a dead-looking “other” that haunts the place too. When he shoots his doppelganger in the leg, his own leg is the one that is injured. Throughout this time, the house shifts from its modern, dilapidated state, to its previous, livable state. The mystery of the house and the twins’ (clearly) paranormal ties to the place unravel amidst this chaos.

Cerda’s ghost (sort of) story is uniquely visualized in The Abandoned. He uses a few familiar horror/ghost film tropes, but his approach is fresh. He let’s the house play a major character – it isolates his protagonists and presents unavoidable avenues of action for them. And he (and editor, Jorge Macaya) isn’t afraid to let his lens linger on creepy empty rooms and flooded basement hallways, building dread to supreme effect. The viewer’s sense of unease is ratcheted up because of this. We expect a certain rhythm to the editing of a film. When that rhythm is warped, even slightly, it’s unsettling. And it’s a fine line between unsettling/take-you-out-of-the-moment and unsettling/good-scary-anxiety. Cerda is firmly on the good-scary-anxiety side of that line. His ghost/zombie/doppelgangers look a little familiar (from a makeup effects POV. not just because they are doppelgangers), but the context they’re presented in transcends the cliche that zombies have unfortunately become. Besides, they’re not zombies. But don’t ask me what to call them. The whole thing is wrapped up in a neat little bookend that left me with a “nice one” smirk.

The Final Cut: The Abandoned is a genuinely scary film that builds on the familiar ghost story to create a unique and wholly mysterious story. Cerda’s haunted house is a malevolent force that elicits maximum fear from its reluctant visitors (and his audience).

Bonus content (you’re welcome): This isn’t very “bonus”, but Cerda was slated to direct I am Legion, a WWII period vampire film based on a comic book, scripted by Richard Stanley. I have no idea what ever happened to that project (it’s been nearly 5 years since it was announced). But wouldn’t that be awesome?! If anyone knows what Cerda is up to, let me know. I’d love to see more from him.