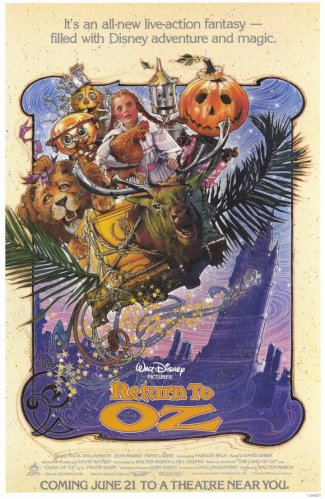 You might be thinking, “What’s this shit, Danger?” You’re wondering why I’d ramble about Return to Oz, a kids’ movie from 1985. A Disney movie no less! Well, I’m going to make a case for categorizing this movie as a horror film. “A horror film?!” you sputter. (i have a weird image of my readers. i’m picturing monocles falling out of place and into your brandy snifters) If you’ve seen the film, you should know exactly what I’m talking about. If you haven’t (or you’ve suppressed the memory because it traumatized you), maybe I can convince you to check it out. (i mean, just look at that poster! the scarecrow king’s psychopathic smile is enough to give you nightmares!)

Dorothy (of The Wizard of Oz fame), played by Fairuza Balk, is depressed and has become an insomniac since her return to the farm from the wondrous land of Oz. (ptsd?) Auntie Em and Uncle Henry realize they can’t help her and put her in the care of a psychiatrist whose methods are a little shocking. (ha! he uses electro-shock therapy, guys!) One stormy night, just as the doc is about to shock all of that Oz nonsense out of her head, Dorothy makes a daring escape aided by a mysterious girl. The girls are pursued by a mean ol’ nurse and end up falling into the flooded river/creek. Oh no! Dorothy awakes floating on a chicken coop and the girl is nowhere to be found. Dorothy and one of the chickens, Billina, end up in Oz. But it’s not the vibrant, technicolor Oz of her previous journey. It’s a desolate wasteland where she is hounded by nightmare creatures with super long arms and wheels for hands and feet. She finds some of her friends – The Tinman and The Cowardly Lion – but they have been turned to stone! While fleeing the Wheelers, Dorothy and Billina find Tik-Tok, a clockwork robot. He tells them The Scarecrow has been kidnapped by the evil Nome (gnome?) King who is working with Mombi the witch. (stick with me, there are a crapload of characters) So, Dorothy, Billina, and Tik-Tok all set out to save Scarecrow. Along the way, they pick up Jack Pumpkinhead, a living stickman with a jack-o-lantern head, and add him to the rescue party. Jack has some magic, life-giving powder from Mombi (that’s how he was brought to life) and they use it to make The Gump, a flying being made of furniture with palm frond wings and a sentient taxidermied moose head. (Dorothy Frankenstein) The party uses The Gump to fly across a no-man’s-land to The Scarecrow’s rescue. There they confront the terrifying Nome King and Mombi, who wants Dorothy’s head. Not metaphorically. She has an interchangeable head and wants to add Dorothy’s to her vast macabre collection. (what the fuck, Disney?!)

Let’s take a moment to tease out the most horrific phrases from the synopsis above – “insomniac”, “electro-shock therapy”, “desolate wasteland”, “wheels for hands”, “evil (g)nome”, “witch”, “jack-o-lantern head”, “sentient taxidermied moose head”, and (last, but not least terrifying) “interchangeable head”. That’s some intense shit for a PG movie! In fact, until now (while I’m writing this), I thought the movie was PG-13. I have some vague memory of hearing that it was the first Disney movie to earn that rating. (i can’t be bothered to do the research on that) The movie is psychologically damaging! I’m not even sure if Dorothy really survived that fall into the river. Or if she ever made it to the river at all. A very strong case could be made for her having gone through the electro-shock therapy after all (which was stymied JUST as she was about to be shocked) and that all of the Oz stuff was just her scrambled brain dreams. (you know, like her getting a concussion in the original and dreaming up idyllic Oz) THE WHOLE MOVIE IS A (and i hate to use this word) MINDFUCK. It’s straight up crazy. In other words, it’s awesome. Watch it with some children that you don’t like.

THE FINAL CUT: Should ramblings have final cuts? Maybe “check out Return to Oz” is enough.

BONUS CONTENT (you’re welcome): In the Oz books (the movie pulls from a couple and I’ve read too many to remember exactly which one), the Frankensteinian Gump hates his very existence. He says outright that he is an abomination. And when he is given a single wish, it is to be destroyed. Now that’s some dark shit.