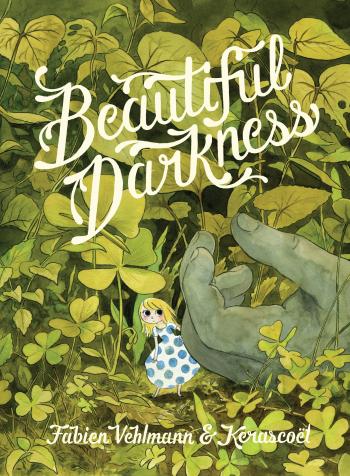 It has taken me way longer than I expected it would to write a review of the graphic novel, “Beautiful Darkness”. I haven’t been too busy, even though it IS holiday with family time. No. It’s that the book is so complex. I’ve read it and re-read it and I still worry that I won’t be able to convey the intricacies of the story as well as I would like to. Wait – don’t let that scare you away! If this is your first time here, stick around. I promise I’m not completely incompetent. If you’ve been here before, then you know I’m not incompetent. Right? Shit. This intro has gone off the rails. Let’s just get into it.

The book opens with brightly-colored, cutely-drawn Aurora and Prince Hector having some tea together, when a glob of pink goop suddenly drips from above and into Hector’s tea. Soon, large pink blobs come splashing down all around them and they run. Their whole house(?) becomes soft and red and squishy before they emerge from what looks like a cave but turns out to be the nostril of a girl. A dead girl. In the woods. Laying on her back among her school notebooks and pencil case. The decomposition of the child is a natural disaster for the little people, like Aurora and Hector, who were living in the relative safety of her body. Displaced, they now have to survive in the forest among the critters and elements. Aurora takes it upon herself to organize the child-like little people (almost all girls). Everything seems utopian at first, but their little society quickly falls apart as hunger, stupidity, hedonism, and selfishness get the better of them. Despite Aurora’s best efforts, the little people just can’t seem to avoid tragedy (or cruelty). The last straw for her comes when she is betrayed by the infinitely cruel Zelie (a character who makes the mean girls of Mean Girls seem downright lovely even at their worst). Aurora (going full-on ‘fuck it’) runs off to fend for herself. She gets help from Jane, who left the little people right at the beginning and has been doing very well for herself hiding within the walls of a human man’s cabin. Jane takes her in and the two enjoy the relative peace and safety of their digs. That is, until Zelie and her entourage find them while seeking shelter from the winter snows.

Vehlmann and Kerascoet have crafted an intensely bleak dark fairy tale in “Beautiful Darkness”. Kerascoet’s simple, whimsical lines (reminiscent of Jean-Jacques Sempe of Le Petit Nicolas fame) are perfectly discordant with the casual cruelty of the characters.  The book quickly (in the first few pages) dispels any notion the reader may have of the little people being benevolent fairy-types as soon as they are shown indifferently taking residence in and around the  grimly-rendered child’s supine body. The story is firmly planted in the cynical, with humankind’s worst predilections toward inhumanity reflected in these little human-like creatures. Characters betray one another, they give in to base desires, and they are corrupted by even a tiny bit of power (or simply proximity to power). Readers with the slightest sense of justice will be shocked and appalled by the wicked behavior of the little people. But they will also see that stupidity/ignorance and indifference can be as reprehensible as evil. If you’re willing to dig a little (with your brain), this allegorical story is profound (if exaggerated. at least i hope it is).

THE FINAL CUT: The aptly-titled “Beautiful Darkness” is a gorgeous tale of a deteriorating society told through the actions of its otherworldly little people living in and around the decaying body of a schoolgirl. Readers who appreciate bleak stories will enjoy this profoundly disturbing dark fairy tale.

One thought on “BOOK – Beautiful Darkness by Fabien Vehlmann & Kerascoet”