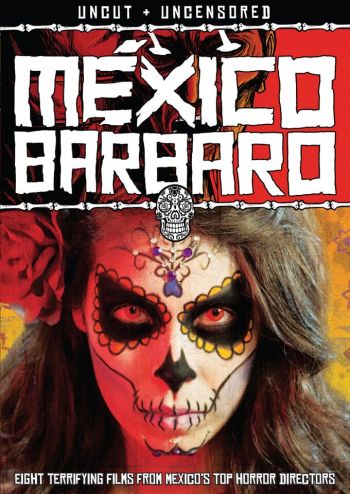 Mexico Barbaro (barbarous Mexico) is a horror anthology film that tackles some of Mexico’s urban legends and folklore. As we all know, anthology films can miss their marks more often than hit them on a segment-by-segment basis. So, I thought it only fitting that I review each segment individually. Let’s get into it!

An old reporter recounts the time (in 2014?) when he was a young man just getting started on his career. He arranged a once-in-a-lifetime interview with an inside man willing to tell some of the secrets of the Mexican drug cartels. The story of brutality and superstition is backed up when the man leads the reporter to a revolting shrine.

“Tzompantli” is effectively nerve-wracking, but not necessarily scary. We fear for the young reporter’s safety as he coaxes information from the violent cartel member turned whistleblower. And the reveal at the end is sufficiently sickening. There is violence, but there is nothing particularly horrific at play (besides the shrine). And the frame of the old reporter telling the story only served to confuse me. Is the segment set in the distant future? Why? It’s just voice over. I don’t even get to see flying cars. And what did it add to the story? That the reporter survived? Isn’t that a bit of a spoiler?

A couple of outlaws – one critically injured – hole up (hold up?) in a dilapidated hacienda that turns out to be not quite as empty as it seems. (there’s a damn ghost in there!)

This is the mexican horror equivalent of the gothic British/New England horror films of yore. The cinematography is beautiful and paints a very unnerving picture of the decaying mansion that infuses the short with an almost unbearable sinister atmosphere. When the ghost (sexy ghost!) shows up, we know things cannot go well for the trespassers.

A girl takes a cigarette from the hand of a dead boy. Lighting it draws the attention of a demon (I’m pretty sure it was a demon. it was eerie, whatever it was) who tells the girl she must drain (“drena”) the blood from her sister’s (mother’s?) vagina. She does and it doesn’t end well for her.

Drena is a dark little segment that eschewed synch sound. The sound design was effective and the makeup effects were sufficiently scary. Although the story was interesting, I can’t help but think that I’m missing something by not understanding the basis of this particular bit of folklore. Vagina blood? Like, menses? It didn’t look like it. And why the cigarette? Maybe a better cultural understanding would help. Bottom line though – it looked/sounded good and it was disturbing.

A young couple rents a cabin on a weeknight (that’s important) to create an idyllic setting for the young woman to lose her virginity. The creatures (“aluxes”) in the surrounding woods have other plans.

This segment opened with a couple of assholes catcalling the young woman. It made me uncomfortable, so I assumed that those jerks would get their comeuppance. Turns out that it was just a setup for the girl to be a screeching nag when she got back to her boyfriend who was waiting for her in the car. Oh no. An inauspicious start to be sure. The filmmaker’s choice to use a beat up old film effect for the whole segment further put me off. I hoped it would redeem itself with some fun twist on cabin-in-the-woods tropes. It didn’t. Instead, the girl screeched some more and then was kidnapped by a creature before the couple could “couple” only to be raped and vomited on. Ugh. The creature costumes were very B-movie, the characterizations (harbinger, horny teen, screeching prude) were tired, and the ending was predictable.

A physically and intellectually disabled little girl spends her time looking out of her highrise window and calling the local homeless dreadlock “coco” incessantly (which is subtitled “bogeyman”). Her mother treats her like shit but dotes on her brother. Turns out the little girl might know what the hell she’s talking about.

This segment was a great little bit of urban folklore. It deftly shifts the viewer’s sympathies over the course of just a few minutes and has an intensely brutal finale (which reminded me of Nacho Cerda’s “Aftermath”).

A woman escapes being trussed and abused only to have a menacing hulk hunt her down to return her to her fate.

“Munecas” offers nothing especially new to the genre, but it achieves its goals competently. The bad guy (reminiscent of Leatherface) is scary, the woman’s situation is dire, we sympathize with her right away, and we feel gut-punched when she suffers setbacks. That’s all pretty impressive for such a short film. And the twist ending is fun to boot. 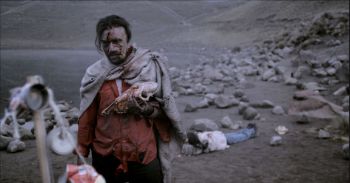 A cowboy with a horribly scarred face digs up a corpse and transports it to a remote oasis in the desert. Over several nights he magically, ritualistically brings the corpse back to life. Then he reveals his relationship to the dead man and his true intentions.

I love a good revenge story. Especially if it’s supernatural. This one has a great actions-louder-than-words manly-man protagonist, and his motivations make for a genuinely interesting mystery. One small complaint: there is some distractingly obvious CG in some scenes that took me right out of the otherwise engaging story. 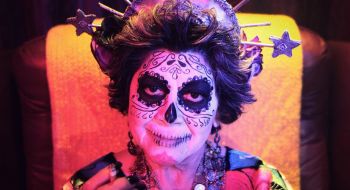 As women prepare themselves in a communal dressing room for a night of stripping, their domineering boss (madame?) menaces them. On the topless dancin’ runway (reference!), the ladies reveal their beautiful/spooky Day of the Dead makeup and punish lascivious men ruthlessly.

This one was a lot of fun. Character motivations are misinterpreted only to come to light in a wicked twist. I could imagine Rob Zombie really liking this segment. There’s some real sexy comeuppance in this one!

THE FINAL CUT: So there you have it. Overall, Mexico Barbaro is a very solid entry into the horror anthology crowd. With nearly all of the segments hitting their marks,  it is definitely one to check out if you’re looking for a good anthology and don’t mind reading subtitles.