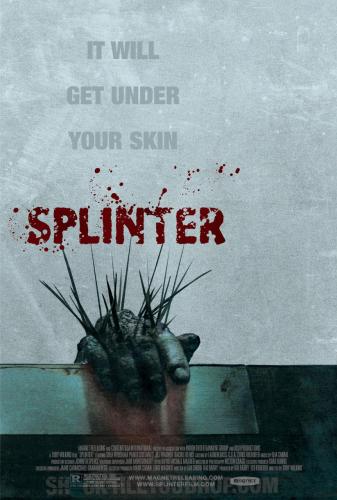 I’ve seen a lot of “the best horror films you’ve never seen” lists on genre film sites and behind very tempting clickbait links (presumably – I’m not an idiot!). In fact, these lists are the main reason that I wonder “what the damn fuck is this?” when I open most of my DVD envelopes from Netflix or Facets. Typically, I’ve seen all or most of the films (brag) but I do find good/interesting/terrible indie or older films this way. One thing I’ve never seen on these lists is mention of Splinter (2008) from Toby Wilkins. And, apparently, many horror fans missed this rad little gem since every time I ask somebody if they’ve seen it, I get a blank stare. So, here’s my first “best horror films you’ve never seen” listicle, featuring a single movie spanning several subgenres (that’s the list part). Maybe it’s more of an individicle? Either way, I’m writing about Splinter.

You might remember Toby Wilkins from his other feature film, The Grudge 3. If not, that’s fine. Wilkins shot that movie in Bulgaria or some such place after making Splinter right here in the good ol’ USofA. Why am I telling you this? I don’t know. But the two films could probably not be any more dissimilar. So, if you saw The Grudge 3 and didn’t like it, don’t hold that against Splinter. Splinter is a smart, gory (sub)genre hybrid that I think you should watch. Like, right now…  What’d you think?

The story involves a (hetero) couple heading out into the great outdoors for an anniversary camping trip. It is made very clear that Seth (Paulo Costanzo) isn’t a big fan of roughing it despite being a biology major with an encyclopedic knowledge of tree lifespans. Polly (Jill Wagner) is his badass girlfriend who’s all about kicking nature’s ass by surviving a night in a tent. (subgenre 1: nature is scary.) The plan is scuttled and the couple pack up to head to a motel. En route, they pull over to help a woman, Lacey (Rachel Kerbs), who seems to be in distress at the side of the road. Turns out, Lacey’s boyfriend, Dennis (Shea Whigham), is an armed bad guy type who carjacks/kidnaps Polly and Seth to use them and their vehicle as cover for getting him and his special lady (read: meth addict) across the border. (subgenres 2 & 3 – redneck (white trash) menace & home (car) invasion.)

Alright, I need to speed this along –

Subgenres 5 & 6: siege & isolation – trapped in a gas station by relentless creatures with no means of communication.

Subgenre 10: zombies – creatures have definite zombie-like qualities (i’m open to debate on this).

Honorable mention: possession – just misses out because 11 isn’t a good number to leave off on.

We’ve all heard of the saying “jack of all trades, master of none”. And I can see how, reading the above list, you’d be put off for just this reason. I admit that on paper (screen) this looks like it could be a muddled mess of a shotgun approach to horror.  I can also see how you might not entirely trust me yet since this is really only my second post, but trust me – this movie is worth checking out. The characters are smartly drawn; the photography has great depth and sets the tone perfectly for the action (there are even some clever saturation shifts); the tension is high; the creature effects are well-done and gruesome; and, perhaps best of all, Wilkins opted to rely heavily on practical effects! That fact is driven home right off the bat when Charles Baker’s (Skinny Pete from Breaking Bad) character is attacked by a bloody, fucked-up raccoon puppet.

THE FINAL CUT: Splinter is a high intensity horror subgenre hybrid with an unpredictable plot, smart characters, and plenty of gore. Wilkins wrings greatness out of a small budget production and effective performances from his tiny cast. Shea Whigham is especially top-notch – going from menacing to sympathetic (sort of). (as an aside – I thought he was Robert Carlyle at first.h e is not)