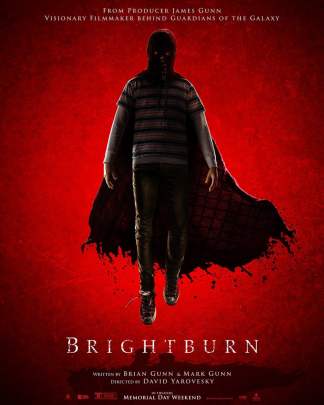 I’ve been “gone” for a long time. At first it was because I was telling myself that I was putting that energy into writing a short story. Well, that certainly got started. I wrote a couple of pages even. But then I remembered that writing is hard. Not hard hard, like driving a truck for a living or something. Hard like… a modicum of mental energy hard. Ugh. I’m lazy, alright? There it is. You dragged it out of me. Anyway, I’m not saying I’m “back” but I’m here now. What do you get out of it? This Brightburn review of course! Here we go. (oh, shit. i forgot that ‘let’s get into it, shall we?’ is my thing. i’m rusty!)

The Breyers are the Kents from the Superman story (not literally, but it paints a picture). They are a childless farm couple who happen upon a tiny spaceship with a tiny child inside. They take the child in and name him Brandon. Early on in the movie we’re treated to a 7th grade overview of brood parasitism, wherein an animal doesn’t raise it’s own young, but drops them off for another species to do so. (that’s foreshadowing!) Everything goes swimmingly until Brandon turns 12. Then everything goes not at all swimmingly. For humans. Brandon learns of his uniqueness and realizes quickly that he’s not just different, he’s “superior”. (like, some kind of superior man) The power corrupts him pretty absolutely. Then gory mayhem ensues.

It is probably not too presumptuous to say that the premise of this film is objectively interesting. What if? What if Superman wasn’t impossibly altruistic? Further, what if he was malevolent? Batman was fucking right! There’s nothing we could do. There’s NOTHING we could do! We are but ants to him! SO… Brandon is Bad Superman. There’s some great set pieces and some shocking kills. That’s good. There’s also some CGI that is obvious and blurry that takes the viewer right out of the story. There are also some (admittedly minor) plot holes that do the same. And some of the film drags. (perhaps only because we know where it’s going and we’re eager to get there) That’s bad. What does that mean for the film overall, you ask? And the answer is that it’s not great. But it’s not terrible either. It’s about right in the middle of terrible and great on the movie-rating spectrum. That’s where a lot of films fall. Films that are just fine. Just fine.

The Final Cut: Brightburn is a serviceable envisioning of a very solid “what if” premise. A few great set pieces, a couple of surprises, and some gory kills make it worth checking out if you don’t have anything better to do.