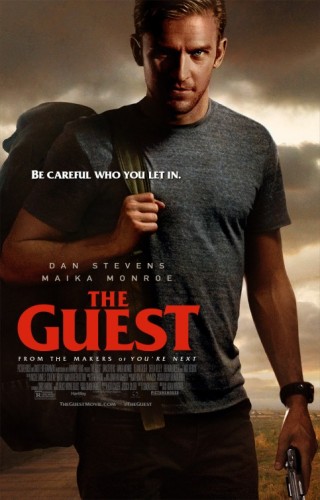 Simon Barrett and Adam Wingard are the creative team behind some great genre offerings from the past couple of years. Their segment in The ABCs of Death was super fun. I can apply the same phrase to You’re Next and add that it was also intensely thrilling. The same can also be said of The Guest. Maybe Barrett and Wingard are forging their own genre – super fun intensely thrilling-ers! Or maybe that’s a bit cumbersome. (Whatever you call it, I’m excited to see their remake of I Saw the Devil!)

David (Dan Stevens) arrives, military duffel on his back, at the home of the Petersons with a message from their recently deceased son. David was in their son’s unit and was with him when he died. Mrs. Peterson (Sheila Kelley) bonds with the young man (in a motherly way. don’t be a perv) and asks him to stay for a few days. Mr. Peterson (Leland Orser – the killer strap-on guy from Se7en!) is wary at first but comes around when the polite David wins him over with his easy smile. The Peterson’s kids, Luke (Brenden Meyer) and Anna (Maika Monroe), are both won over too when David nearly kills some bullying teens and when he takes off his shirt (respectively). As the story progresses, we are privy to David’s strange behaviors – not sleeping, heated phone call, asking a drug dealer if he can get guns, etc. Bad things seem to happen around this guy. Anna calls the army to ask about him, which raises alarms and a shadowy kill squad (led by “The Wire”’s Lance Reddick) is sent to neutralize David. Will they get there in time? Will the Peterson’s survive David’s “protection”? Well, you’ll just have to watch the movie to find out, won’t you?

I want to give it up for Dan Stevens and whoever had the idea to cast him in the first place. He was pitch perfect as the menacing psychopath in (very polite) sheep’s clothing. I had only seen him in “Downton Abbey” before The Guest and I was shocked that it was the same actor. All of the acting is solid. And the film manages to be a ton of fun while also progressively building an almost unbearable sense of dread. The finale is a blast(!), delivering some old school scares under a haunting soundtrack (Anthonio by Annie). The biggest complaint that I have is that the story gives too much away about David’s background and motivation. It veers into made-for-cable levels of deus ex machina. Despite that, horror fans will find plenty to love in the film (there are even a few Easter eggs for fans of classic horror thrown in!)

THE FINAL CUT: The Guest is a blast of a movie that features a standout performance by Stevens. Its snappy pace, sense of humor, pervasive dread, and explosive finale far outshine its minor weaknesses.